How Do Body Farms Make You Appreciate Decomposition?

Body farms are the stuff of fantasy – fictional ideas as in Patricia Cornwell’s bestselling novel. Or are they?

Decomposing bodies are the center of a murder mystery.  Each body has a name, a face, a history, a life and loved ones left behind.  In my earlier post, you may have read (if you had the stomach) about some horrifying things that happen to a human body after death.  Law enforcement officials meet these horrors often when investigating a death scene.

Imagine you are on a hiking trip.  You come upon a “farm” where bodies litter the ground instead of cattle.  You   find bodies inside shallow graves.  They are inside of vehicles and even a noose.   Could you suppress yourself from screaming?  Probably not.  You have just come across a body farm.

Before the 1970’s, coroners found it difficult to pinpoint time of death.  Badly decomposed remains were very troublesome.  The techniques of using insect and bone evidence to decide time of death were almost non-existent.

Finally, techniques of determining when a person died to put the crime scene in perspective were developed by an anthropologist at the University of Tennessee in Knoxville.

“I hate death. I’ve lost two wives to cancer. I just don’t like that scene at all—funerals and burials, anything like that. But I never see a forensic case as a dead body. I see it as a challenge to find out if I have enough knowledge to uncover who that individual is and what happened to them.” — William M Bass

In 1971, Dr. William M. Bass began a unique research facility.  Bass wanted to accurately and systematically find patterns in human decomposition.  His body farm was born.  Even today, bodies are left in a field in varying circumstances to rot and by letting nature take its course, researchers gather evidence from insect activity, decaying bones and odors. The University of Tennessee Anthropological Research Facility, nicknamed the Body Farm, was the first of its kind.  Furthermore, before Bass opened his body farm, there had been no serious advances in the study of decomposition since the 13th C.

Body farms are unique open-air crime labs. Click To Tweet From 150 – 190 human bodies are on-site at any time in the Tennessee facility.  The bodies are donated by people who believe in the work done on this site.  They hope to snare killers beyond the grave.

“Every one of these lessons would serve me well in the years ahead as I began applying the secrets I learned from the long-dead to understanding the stories of the recently murdered.” ― William M. Bass, Death’s Acre: Inside the Legendary Forensic Lab the Body Farm Where the Dead Do Tell Tales

On Bass’ body farm, it is most noteworthy thatHow Do Body Farms Make You Appreciate Decomposition Furthermore, the research done at this facility has been used to develop a number of techniques for determining the timing and circumstances of death.

So….how do you feel now about body farms?  Your level of respect, it seems, should have soared for these unusual laboratories. Perhaps, if that’s the case, you might consider donating your body to one of these research labs.  Consequently, the two best reasons to donate your body to a body farm are a green burial and your legacy of advancing scientific progress.  Who knows?  You might even provide the evidence needed to catch a killer. 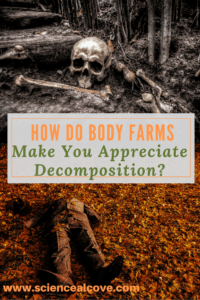