10 Disgusting Things Happening to a Body After Death

Inside:  Death and taxes, they say, are the only sure things. The ugly truth of putrefaction is another. Our body after death returns to the dust from where it came.

Death and taxes, they say, are the two certainties in life.  I find the process of doing my taxes an ugly one.  The natural process of death and decay is horrifying.  Thank goodness I won’t be around to watch my body after death turn into worm food.

From my rotting body, flowers shall grow and I am in them and that is eternity. —Edvard Munch

For those of you who are squeamish, you might consider checking out a less disgusting post on my blog.  If, however, you have a morbid curiosity and enjoy watching series such as “Bones” or “CSI” or you like reading books such as the Body Farm series then by all means read on. The trip from death to dust is horrifying but is definitely chock full of science. Click To Tweet  Here are 10 disgustingly horrifying things that happen to your body after death. 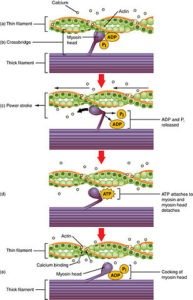 As soon as your heart stops beating, blood stops circulating throughout the body. Your body after death begins to cool rapidly until it reaches room temperature.  This process is also known as algor mortis.

Once your blood stops circulating, it is subject to the force of gravity.  Where you fall after death, how your body is positioned, determines where your blood will pool.  In those areas, your skin tends to develop a deep red-brown stain from the release of haemoglobin as the red cells burst.  If you were murdered, it is possible to determine if your body is moved by examining sites of livor mortis.

Within 2 to 3 hours after death, the facial muscles stiffen.  The bigger muscle groups follow within 6 hours of death and after 12 hours your entire body is locked in place.  The speed and length of time rigor mortis lasts is dependent on environmental temperature and other factors including your activity level just prior to death.  It can last up to 72 hours and then the body becomes pliable once again.

Rigor mortis is a chemical process  As long as calcium is in the cells, the muscle fibres remain contracted.  ATP, the body’s energy molecule is required to pump out the calcium allowing the muscles to relax.  When you die, ATP is no longer produced, meaning the calcium that flows into the muscle cells can no longer be pumped out. The calcium causes myosin-actin cross-bridging. Thus, your muscles, thus are in a perpetual state of contraction.  Rigor mortis disappears when the myofilaments decompose which occurs forty-eight to sixty hours after the peak of rigor mortis.

For a few days after death, some cells such as skin cells are still alive.  So for a while, your body after death might look quite normal at least on the outside.  However, immediately after death, decomposition begins.  Your blood is no longer being thrust through your vessels, so the acidic fluids in your intestines stay put and begin to eat through the tissue.  Living bacteria, no longer kept in check by your immune system, begin to feed off and break down your cells.

The first signs of decay occur fairly quickly as a greenish tinge on your abdomen.  Without cooling or further processing, decay quickly spreads to your liver, kidneys, lungs, brain and lastly your prostrate or uterus.  Openings in your body eventually leak greenish substances.  Fairly quickly the stink of volatile chemicals such as cadaverine and putrescine, produced as your cell proteins are broken down, becomes overpowering.

Stages of Decay in Your Body after Death

Once death occurs, your body will go through some interesting and progressively vivid color changes. Immediately after death because your blood stops circulating and pools to the lowest points of your body.  Your skin takes on an ashen color.  As decomposition progresses, your skin tone becomes greenish from decomposition fluids.  As the blood clots and then red blood cells burst, releasing haemoglobin, the body takes on a reddish tinge.  Further decomposition of haemoglobin and other compounds lead to a purple and finally black color.  These color changes begin in the lower abdomen and spread from there in a marble vein-like pattern.

A decaying body quickly begins to produce a cloying odor.  Shortly after death, your body begins to produce a variety of volatile chemicals due to the actions of bacteria breaking down your tissues.  Some of these are quite potent in small quantities.  There are 4 chemicals which produce most of the nastiness living humans can detect.

The following chemicals also contribute to the variety of corpse smells:

Your body eventually bloats, somewhat like a balloon, due to the build-up of gases created by the action of bacteria feasting on your body.  As your corpse expands, your eyes will be pushed up out their sockets, bulging at first.  Your tongue will also be pushed out of your mouth.  Not an attractive picture is it?

Super Weird Things that may happen to your Body after Death

About a week after death, when your skin tone gets an attractive marbling, your skin begins to blister.  If anyone happens to touch you at this point, your skin falls off.

About a month after death depending on conditions such as surrounding temperature and where your body lies, a number of gross things happen.  Your hair and nails fall out.  Your organs completely liquefy and your swelling body bursts open releasing the gases and liquified mush that was your body.  Not a pleasant picture at all is it?

Again depending on environmental conditions your body is fairly quickly stripped of all flesh shortly after your dramatic bursting open.  It can take from days in wet, humid conditions to a year in dryer less humid conditions. Flies and other insects have had their way with you if you’ve been left out in the open.  As well, various parts of you may have been scavenged by any number of creatures. Buried bodies take much longer to skeletonize because your body is exposed to far fewer scavengers and fewer environmental ravages.

Death is inevitable but definitely not glamourous.  Whether we like it or not, we all eventually become part of the cyclical recycling of matter in our biosphere.

What happens to our body after death is not pretty but it is science! Click To Tweet 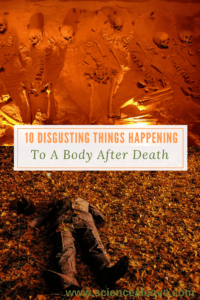