Inside:  Let the puffins of Witless Bay be a super memorable experience when you visit the grand island of Newfoundland.  Take a boat tour (I highly recommend Molly Bawn Whale and Puffin Tours) to see the unique birds perhaps closer than you’d imagine. Note: updated August 20, 2018

An Unexpected Meeting with the Puffins of Witless Bay

Puffins of Witless Bay. I never in my wildest dreams thought experiencing puffins would be the pinnacle experience of our 25th anniversary trip to Newfoundland.

So why then were puffins the bomb on our recent trip to the island in mid August.  Well let me tell you the tale!

On our second full day in Newfoundland, we set out to Witless Bay for another cruise.  Our first cruise the day before with Iceberg Quest Boat Tours had been a wonderful way to see St. John’s coastline and we did see whales but we are greedy and wanted more whales and a more intimate up-close experience.  Kodiacs or kayaks would have been the way to go in that regard but I needed more courage for that….its on my list for next time.

Any who, we set out the next day for Witless Bay.  A reservation was made that morning with Molly Bawn Whale and Puffin Tours. The drive there from St. John’s along the Irish Loop was full of amazing scenery in itself.  I highly recommend the drive!  We found Mobile, a little community along Witless Bay, bought our tickets, found the boat launch site and waited for the boat to return from its first morning tour.

This is when our luck became amazing.  A truck pulled along the dock and a young man stepped out.  He immediately began pulling out crates from the back.  Anyone who has animals, especially cats, would recognize these as cat carriers.  Of course, my curiosity was peaked at this point so I quickly joined the rest of the guests gathering around this young man.  Instinctively, I knew these were not cats….I’m sharp that way, lol.

Speaking with the young guy we discovered that there were indeed creatures in the carriers.  And yes, they weren’t cats.  They were puffins.  Yes, you heard that right….puffins.  In fact, they were baby puffins….pufflings.  None of us could resist the chance to see pufflings as with a name so adorable they must be incredibly cute.  And indeed they are.

Problem with the Puffins of Witless Bay

After seeing the provincial symbol of Newfoundland up close and personal we were super stoked to find out these little babies were travelling on the boat with us.  In fact, they were being returned home by the crew of the Molly Bawn.

Weren’t they already home?  Well not exactly.  As all puffins do, the puffins of Witless Bay nest on land each year.  They produce a single egg that hatches into the cutie we just met in the crate.  The pufflings leave their parents in mid-July and August, testing their wings and hanging out in the ocean diving for fish.  They don’t breed until they are 4 or 5 so they live in the ocean fishing for a long time without returning to land.

So how did the young man end up with all these pufflings to return to the ocean via the Molly Bawn?  Good question.  Like many animals and insects and people too for that matter, pufflings are attracted to lights.  When the night sky is clear or mildly cloudy they use the moon and stars as their means of finding the open ocean.  But, when the weather is foggy or misty the little pufflings often become disoriented and fly towards the light of civilization.  They end up in town often on roads.  Pufflings and cars are not a good combination and these young birds are often hit and killed by passing motorists.  Pufflings also will hide in vegetation.  They’re young, in unfamiliar surroundings and get scared.  If they aren’t found they can die of hunger or become prey to predators.  As commercial and residential development along the shores of Witless Bay has increased, the number of lost pufflings found along roadways and backyards has also increased.

Puffins of Witless Bay are not an endangered bird in Newfoundland yet but they are classified as vulnerable.  Their numbers do seem to be dropping.  Irregardless, Newfoundlanders do not enjoy seeing their provincial bird as regular road kill.  One man, a German summer resident, Jürgen Schau, took it upon himself to do something about these lost pufflings.  He organized the Puffin Patrol about 11 years ago.  He and his wife began capturing pufflings they found in town.  Back in their garage they would give them refuge for the night and then release them at the beach the next morning.  The concept took off quickly and they recruited neighbors, kids and adults, to help find and capture the babies.  Mr. Schau has noted that no banded pufflings have ever been recaptured in the 11 years of Puffin Patrol.  Apparently these babies learn fast and don’t make the same mistake twice!

This year marked the first year that the Puffin Patrol was not centered at the Schau residence.  Summer residents of Witless Bay still turn out nightly, between the hours of 8:30 pm and 12:30 am, to rescue pufflings from the roadside.  2017 Puffin Patrol headquarters moved to O’Brien’s Boat Tours.  All birds brought to headquarters are banded, weighed, their wings are measured and a random sample are tested for avian influenza.  As well, their general health and place of capture is noted.  Data is available for studies and location data is used to decide hot spots.  Knowing where many birds are found is also helpful in developing strategies to cut the numbers arriving on land.

Because the pufflings are prey to a few larger seabirds, a number of boat touring companies have begun taking the crates of babies and releasing them one at a time into the ocean far enough out that the predatory birds are not as much of a threat.  It was our good fortune to be on one of the boat tours – Molly Bawn – and be a part of this special tradition of Witless Bay.

I was fortunate to travel to the St. John’s, NL area with my oldest son in August of 2018.  It was almost a year to the day my husband and I traveled last year.  On our first evening my son, who is an environmental science student wanted to be part of the Puffin Patrol.  I had been keeping tabs on the organization through their Facebook page and so I knew where we needed to be and when.  I don’t have pictures of our adventures.  There is a fair bit of equipment involved – a net, lights, the carrier in which to place found pufflings.

We drove to an area with lighting we thought they would be attracted to.  Other patrollers were close by.  We searched shorelines, at the local fish packing plant which we were told often had many lost pufflings.  Tall grass, storage containers and bins were searched.  As with many first-time patrollers that evening we were not successful in finding any stranded babies.  We started our search at 9pm and finished by 10:30pm.  We had been up since 3am to catch our flight that day and were exhausted.  When we returned to headquarters, five pufflings had been found.  We were told Gatherall’s Boat Tour would be releasing them the next day so we decided to rise early the next morning and join the 9am cruise to release the puffins!

The number of puffins on the cruise was over 40.  My guess, since we left patrol headquarters around 10:30pm, is that more pufflings are found later at night.  My son and I were grateful there were so many patrollers more adept at finding these birds than we were, lol.  Although not successful at finding any stranded pufflings, my son did have the honor of releasing a baby back to its ocean home.

How to See Pufflings Up Close and Personal

My husband made sure I was able to handle a baby puffin.  The lad got it out of the carrier and placed the beautiful baby in my hands. They like to jab you with their long beaks but it didn’t hurt.  With the rush I was experiencing, I probably wouldn’t have felt much had it taken a chunk of flesh from my hand, lol.  After observing the gently squirming baby, I went to the edge of the boat, got one last picture and released it with a gentle toss into the ocean.  It floated for a few seconds and then dove under the water.  A short time later I saw my puffling resurface a few more feet from the boat.  The smile didn’t leave my face for days after. I never expected to come that close to a puffin of Witless Bay. Click To Tweet

My son and I were able to have the honor to participate in the Puffin Patrol on August 14, 2018.  However, I was dismayed to read that as of August 20, public participation in the program has been suspended.  On the previous Saturday, huge numbers of patrollers arrived to participate.  Dangerous situations occurred and the volume of car traffic and their lights may have attracted even more pufflings to the streets and homes of the area.  Many visitors forget that this is not a tourist attraction, it is an ecological rescue effort.  Shameless selfies and luring of birds to the shore is dangerous for these birds.  For continual updates and more detailed information as to the reasons for the suspension of public participation in the Puffin Patrol check out their Facebook feed below.  They have promised to keep everyone posted.  Hopefully they can modify the program so the public again will be able to participate in this important ecological program. 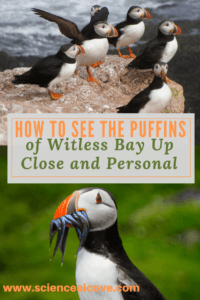