What Unique Forces Create Powerful Waves on the Shoreline?

Waves on a Lake

Part of the magic for me when visiting the beach is the sound of the waves lapping the shore. 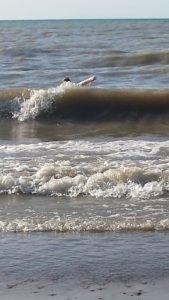 The sound is rhythmical and mesmerizing.  Sitting on a chair or lying on a towel when I close my eyes all tension drains from my body.  From an evolutionary standpoint, it is said that all life originated in the ocean.  Perhaps we are programmed to feel at home at the beach.

I think the calming nature of waves is due to our evolutionary link to the ocean. Click To Tweet My son loves the huge, crashing waves that pound the shore after a good storm. He prefers the thrill of riding and diving into the huge waves common after a good, Ontario thunderstorm.  Most summers we travel to Lake Huron, he is treated to at least one day of wild waves to play in.  Most years I am content to enjoy the sounds and sight of lapping waves.  This year my curiosity was peaked and I decided to investigate the science of waves.

Wind has energy.  That makes sense.  We can feel it push against our skin on a windy day.  Because we can feel the wind we can also understand that it is composed of matter – air molecules are composed of atoms of water, oxygen and nitrogen mostly.  As wind moves over water, the two are in contact and friction occurs between air and water molecules.  Energy from the wind is transferred to the water from this friction.  The water moves, fueled by this wind energy and waves are formed.

What Factors affect the size of Waves?

The height of a wave is affected mostly by three factors:

Now, these three factors do work together to determine how waves form:

Low wind speeds will not create large waves even if wind duration is high and there is a long fetch. 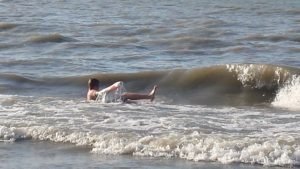 As well, if wind speed is high but only comes in short gusts, big waves will not form.

And finally, strong, consistent winds that blow over a short fetch will not produce large waves.

Some other more obvious facts about how waves form:

“An example of refraction is when waves approach a straight shoreline at an angle. The part of the wavecrest closer to shore is in shallower water and moving slower than the part away from the shore in deeper water. The wave crest in deeper water catches up so that the wave crest tends to become parallel to the shore.”

Shoaling, Refraction, and Diffraction of Waves

So there you have it. There is a lot of science in how waves form. Click To Tweet I’ve only summarized and simplified the physics here.  Wave generation in water follows rules similar to those you may have learned about in science class about light and sound waves.  Physics at the beach – who would have thought?