Fairy-tale Science: ‘What’s the Matter with the Three Little Pigs?’

Inside:  Fairy-tale science?  Who would have thought the two could go together?  But incredibly they do like peanut butter and chocolate.  And they deliver science curriculum concepts in a unique fun way.  Fairy-tale science makes science fun to learn for primary aged kids! *There are some affiliate links in this post.  If you click I might make some coffee money at no cost to you!

The Storyline of this Fairy-tale of Science

Fairy-tale science?  Who would have thought the two could go together?  But incredibly they do like peanut butter and chocolate.  And they deliver science curriculum concepts in a unique fun way.  Fairy-tale science makes science fun to learn for primary aged kids!

‘What’s the Matter with the Three Little Pigs? The Fairy-Tale Physics of Matter’ is a unique retelling of a familiar fairy-tale. I don’t know about you, but I always loved reading fairy-tales.  My kids loved it when I read one to them…..well not so much as adult men but when they were boys they loved them.  Now their fair-tales come in the form of comic book adventures.  Marvel and DC have replaced the three little pigs.  What was not to love…knights, battles and talking animals.  And most often, the good guy wins out in the end.

This version of the three little pigs delivers all that and more.  It has a cast of characters taken from the original fairy-tale.  You have the big bad wolf who in this case is a cunning scientist.  Mamma pig is also present in this story.  She feels her kids are old enough to live on their own.

The Theme Stays but Some Details are Unique

Here’s where the story deviates from the original.  These piglets don’t build their own houses.  The straw, wood and brick houses are replaced by unique structures.  Each of the piglets checks out newspaper ads to find the house of their dreams.  Instead of building a straw house, the first piglet buys a houseboat in the middle of a lake.  The second pig buys an ice igloo.  The third pig buys what seems to be the sturdiest house made of wood and stone.  The house choices are set up to tackle the properties of matter in a fun, fairy-tale way.

This fairy-tale science story investigates the properties of matter including changes of state.  The battle between the crafty wolf scientist and three smart piglets results in a battle of science wits that will keep kids turning the pages wondering who will win out in the end.  I guarantee, the surprise ending will have the kids laughing.

What Are the States of Matter Anyway?

Let’s look at the science behind this fairy-tale science story.

All matter can exist in three different forms depending on a couple of factors like temperature and pressure.  Using a hammer to pound on a solid can break it apart and change its shape.  The little pig with the house of stone and wood learned a hard lesson.  The wood in his house was burned with the crafty wolf’s flame thrower.  Burned wood turns to ash.  But stones don’t burn.  That’s where the wolf’s crane and wrecking ball finished it off by breaking those stones into smaller pieces.  Pressure can break most solids into smaller pieces.  Fire can change wood into something else entirely: carbon ash and carbon dioxide gas.  That wolf is pretty crafty and he knows his science.

All Matter Moves but the Differences Determine its Type

Matter is everything and anything on earth that is made of particles.  You’ve probably learned about them under the alias of atoms.  But for our primary audience, calling them particles is good enough.  In solids, the particles are squished close together and don’t move very much.  They are sluggish and don’t have much energy.  But they can slowly vibrate.  That’s why when you put a solid in various containers it keeps its shape.

Gases are also particles but the particles of a gas can spread very far apart.  That’s because gas particles have lots of energy.  They can spread so far apart that they will fill up whatever container they are in.

So, What Does Temperature Have to do With Matter? 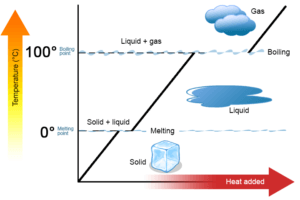 Solids, liquids and gases have different amounts of energy.  That energy is what gives each state its special properties.  Temperature is also what allows matter to change from one state to another.  If you add energy to matter or heat it up, the particles move faster and vibrate faster.  A solid changes to a liquid when heat is added.  A liquid turns to a gas when it gets hotter.

When energy is removed, matter also changes state.  If energy is removed from matter or it is cooled down, it moves slower and each particle vibrates more slowly.  So, when the temperature drops, gas changes to liquid.  A liquid will change to a solid if it gets even colder.  In the story, one of the pigs makes his home in a houseboat.  Wolves can’t swim he confidently thought.  But, the wolf was smart and patient.  He knew in the winter, the lake would freeze.  Then he would have his opportunity to capture that little pig.

What’s Up With Fairy-tale Science?

Fairy-tale science is a brilliant way to introduce science concepts to primary aged kids.  Why use fairy-tales in science class you ask?  There are two excellent reasons:

Pinterest Activities and Experiments about the States of Matter

Let me know in the comments if you’ve used fairy-tale science in your classroom or home school.  Which fairy-tales have you used and what activities have you introduced to get kids pumped about science?