Inside:  Evolution of robotics has been happening a lot longer than anyone realizes.  It began at least with the Egyptians over 1000 years BCE.  Developments in artificial intelligence are taking robotics so much farther. Note:  there are amazon links in this post.  As an affiliate I might make a small commission but at no cost to you.

The Evolution of robotics has its known origins in water clocks, the oldest found dating to 1500 BC.  One of these clocks was discovered in the tomb of the Egyptian pharaoh Amenhotep I.   There were two types of these clocks.  An outflow clock had a container with measurement lines. The container was filled up with water and dripped out at a steady pace. If the owner wanted to check the time, all they had to do was check the change in water level. An inflow water clock worked in a similar manner.  In this clock, a steady dripping of water was captured in a second container and passage of time was determined by the amount of water captured. 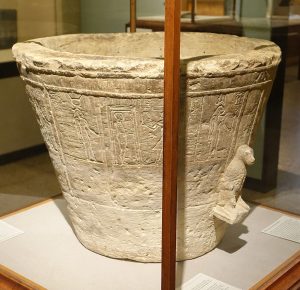 Plato (428–348 BC) developed one of the earliest alarm clocks. He added a simple tube that sucked all of the water very quickly into a final vessel.  As the air was pushed out of the vessel, it produced a sound similar to a tea kettle.

Ctesibius (285–222 BC), known as the Father of Pneumatics, was another Greek inventor who contributed to the evolution of robotics by expanding on the water clock.  His clepsydra, or “water thief,” dropped pebbles onto a gong at a specific time, creating a loud noise.

The Chinese Buddist monk, Yi Xing, created the first mechanical clock in 725 AD.  It was still powered by water but created a sound at each hour by striking a bell.  Xing’s clock also showed the time of sunrise, sunset and the cycles of the moon. 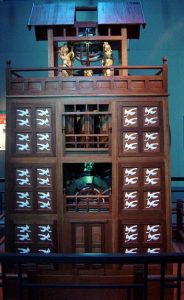 Want to own a working water clock.  Check out this water clock from Amazon.

The water clock was a very cool invention and it certainly paved the way for even more breakthroughs in robotics.

The First Robot, a Mechanical Bird

Archytas designed and built what many believe is the first ‘robot’ called the Pidgeon.   It was a self-propelled mechanical bird powered by steam. The bird was hollow and aerodynamic in shape with a pointed front, like a bird’s beak and two sets of wings.  An opening in the rear of the Pidgeon was connected to a heated, airtight boiler.  As pressure from the steam built up, the bird was able to fly and travel for several  hundred meters.

Da Vinci also made another advancement in the engineering field in 1495 called Robot Knight.  It was a human-like creation that could stand, move and sit using cables and pulleys. This invention was the first known ‘robot’ created in the image of a human. 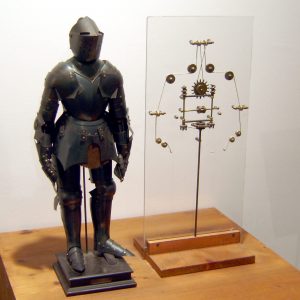 Jacques de Vaucanson was a French inventor who created three Automata from 1738-1739. The first one he created was a humanoid device designed as a shepherd.  It was able to play up to 12 songs on the flute.

He made a second automation called The Tambourine Player which was able to play the flute on one hand and the tambourine with the other.  It was also a life-sized shepherd that could play 20 tunes.

The third was The Digesting Duck.  The duck was able to flap its wings and it was also able to quack and move. Interestingly, it was also able to eat and defecate demonstrating the process of digestion – hence its name.  The real-life movements and even sounds are comparable to the movements that you see in a lot of scientific robots today. His creations are a testament to the power of human invention and are an important part of the evolution of robotics. 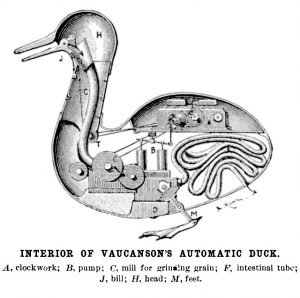 An Artist’s mistaken drawing of how the Digesting Duck may have worked. Public Domain, via Wiki Commons

The development of full mechanical programming began when Ada Lovelace started to experiment with an analytical engine.  She began what would eventually be the precursor to the present day computer. Mechanical programming has really advanced.  It is used as a foundation for a number of other applications.

There have been many advances in robotics and electronics. Today, robotics is a highly specialized field.  Robots are created to work with humans in many manufacturing processes. Co-robots are used on a daily basis. They are able to complete repetitive tasks easily relieving a lot of workers from activities that would otherwise be strenuous or tedious.

It’s surprising to see how much things have developed over recent years. Only time will tell what will develop in the future but so far it’s exciting to see that small movements have paved the way for bigger and better inventions overall.

Make Your Own Water Clock