Why Darwin’s Valuable Ideas Make you Believe in Evolution

Inside: Do you believe in evolution?  For many of us, it is hard to argue with the mounds of scientific evidence pointing to genetic changes in organisms producing new species over time.  Darwin was a naturalist with a passion for exploring.  He had a detailed, logical mind which meant he wrote down all he discovered.  Darwin’s valuable ideas make many people believe in evolution. Note:  This post contains Amazon affiliate links.

Many people believe in evolution but may disagree on how it actually happens. As a biology teacher, I am one of those people who definitely believes in evolution. Some realize that animals have relatives in the distant past. They recognize that an animals’ appearance can be changed quickly through selective breeding.  The many breeds of cats and dogs are a good example of this.  It is not a great leap of faith to understand that wild animal populations could go through similar selective pressures.  Changes in appearance would occur even if not as fast.

Books about fossils show many organisms have changed a great deal over time. Scientists have made a lot of theories to explain these differences.  Some people argue that all organisms were put on Earth at the same time by an all-powerful being (God).  Some have gone extinct but these people deny any evidence of evolution.  The French naturalist, Jean-Baptiste Lamarck (1744-1829) argued that animals could get traits by interacting with their environment.  For example, giraffes necks got progressively longer by stretching their necks to reach leaves from trees. He was convinced that, somehow, this trait of a longer neck could be passed to offspring.  Crazy theory you say?  Ask a young kid how they think a giraffe got his long neck.  You’d likely be surprised by the answers.

Everyone has some Idea about How Evolution Happens

If you asked a primary class or your young children how a Mammoth eventually turned into a much smaller elephant, you would get dozens of entertaining ideas.  Like a young child, Darwin was naturally curious about the natural world.  He read lots of books and research.  Charles Lyell. in Principles of Geology (1830-33)  showed small changes in the fossils over millions of years.  A work called Essay on the Principle of Population, published in 1798 by the Reverend Thomas Malthus described the effect of limited food, water and shelter on populations.   Organism populations would always grow faster than the food and shelter they required.   So, many would starve and die.

Darwin was a religious man.  Although he no longer believed the world and all of its creatures were created in a week like the Creation story tells us, Darwin still felt the need to include God’s hand in his theory of evolution.  William Paley’s Natural Theology (1802) described God as a clock-maker and nature as a machine God sets in motion.  Darwin envisioned life on Earth as a process God started which he then watched play out in the form of evolution.

By 1840, Darwin had worked out his idea of evolution through what he called, ‘descent with modification’.

In 1859 Charles Darwin introduced the theory of evolution by natural selection to the public.  He did it in his book, “On Origin of Species”.  Darwin didn’t really use the term evolution in his book but instead described a process of change in organisms that he called, “descent with modification”.

Darwin: Boy did he Believe in Evolution

Why is the theory of evolution linked mostly with Darwin?  Darwin made huge numbers of observations, took lots of notes and asked lots of questions.  All this was done quietly at home in his study and garden at Down House in Kent and while he explored the world on the HMS Beagle. .  He gathered mounds of evidence that supported the idea that organisms changed over time through natural selection.  In other words, those organisms that survive the longest in their environment are able to breed, and produce more offspring.

Darwin came up with his revolutionary idea by old-fashioned dogged persistence.  He understood nothing about the laws of inheritance.  Mendel’s work on inheritance from his study of garden peas was written in German so even though he lived at the same time as Darwin, Mendel’s research was unknown material for him and most other scientists until the 20th C.  DNA science was quite far in the future. And like Mendel himself, Darwin had no idea DNA existed.  However, once it blossomed, DNA technology confirmed Darwin’s theory that all life shared a common ancestry.

Owing to this struggle for life, any variation, however slight and from whatever cause proceeding, if it be in any degree profitable to an individual of any species, in its infinitely complex relations to other organic beings and to external nature, will tend to the preservation of that individual, and will generally be inherited by its offspring. The offspring, also, will thus have a better chance of surviving, for, of the many individuals of any species which are periodically born, but a small number can survive. I have called this principle, by which each slight variation, if useful, is preserved, by the term of Natural Selection, in order to mark its relation to man’s power of selection. On the Origin of Species, Chapter III: Struggle for existence, page 61.

Do you believe in evolution?  There is lots of evidence to support it if you know where to look.  Start with Darwin.  His book may be a bit hard to read but there are some pretty easy to understand adaptations. 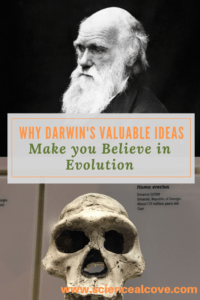