Inside:  Puffins are amazing creatures. You’ll want to know all the puffin facts you can find. Then visit Newfoundland and be part of the Puffin Patrol to learn more.

Why Puffins Are Amazing Creatures

There are hundreds of puffin facts.  Puffins are super interesting birds.  My trip to Newfoundland was so special because I was able to handle a baby puffin and release it back to safety on an ocean boat cruise aboard the Molly Bawn.  Along the Avalon Peninsula in the Witless Bay area they have a Puffin Patrol program.  Read more about this very important program in my post that details how to see those pufflings up close.  The Puffin Patrol saves hundreds of baby puffins from death by hunger and car strikes each year.

The sweet baby puffin I was able to handle did not have the colorful bill of its parents. Even the parents, however, are not so colorful outside of breeding season.  Like the goldfinches that come to my birdfeeder, they use bright color only during those times they need to attract mates. Even though it lacked bright coloring, that little baby puffin was so soft and had that puffy look that gave these birds their name.

Because of my amazing experience, I wanted to learn all I could about these adorable birds.  The following are the most interesting puffin facts I could find.

If you ever, ever get the chance, take what you have learned about Atlantic puffins from this post and go to Iceland, or Maine or my personal favorite Newfoundland and see puffins up close and personal for yourself.  The experience of holding a puffy, soft baby puffin in your hands and releasing it back to the safety of the ocean will not disappoint.  I promise.

A group of puffins is known by various names including an ‘improbability’ of puffins. Click To Tweet 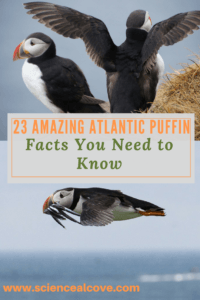