Habitat Fragmentation: The Truth about Why it is Really Bad

Inside:  Habitat Fragmentation happens naturally but development makes it worse. Read on to find out why the creation of habitat islands is a bad thing.

My girlfriend and I spent many days measuring distances between roads and forest.  It was grueling work.  It demanded a lot of problem solving and a huge learning curve in applying mapping skills.  We definitely gained empathy for how difficult it was for the early explorers to map out sections of the world.

Having a good friend help me with the immense challenges of this field work was a blessing.  It brought us closer.  And of course, we managed to have a pile of fun in the process!  Just as important, I learned a lot about why habitat fragmentation is really bad for biodiversity.

What is Habitat Fragmentation?

Imagine you are a squirrel.  You travel across your habitat jumping from tree to tree.  In a pristine forest, you could travel for miles without ever touching the ground.  You are safer from ground dwelling predators.  You are safer from human influences like fast-moving cars.

Now imagine that a housing development has stripped acres of trees to make way for houses.  Roads bisect your home further.  Your precious trees exist now in small patches.

To reach other areas of your habitat you must now travel on the ground to reach a new patch.  Often you must cross roads with fast-moving cars.  Will you cross the road?  Perhaps.  Will you make it to the other side?  At some point the odds will be against you. Traveling on the ground presents other hazards.  Dogs come with people and ground travel means you are at the mercy of neighborhood dogs if you can’t make it to the next tree in time.

Smaller patches are often created in whole forests.  There are a number of human-created causes of habitat fragmentation:

These patches can become isolated from each other.  This process is called habitat fragmentation. When fragmentation makes the habitat unsuitable to support the local species, and/ or if organisms have a hard time moving from one patch to another, habitat islands are created.   ‘Isolates’ is the name given to the organisms within those patches. Consequently, when total habitat area is made smaller and organisms are isolated because of fragmentation, sensitive species may become extinct.

When a forest is fragmented by human development, conditions change from the original, whole forest. Micro-climate of the forest patches is different from that found in the unaltered forest.  Vegetation changes along the new edges and population dynamics of species within the fragments also changes.

Why is Habitat Fragmentation Bad?

Why is habitat fragmentation bad?  Animals and plants may be separated from resources they depend on. Animals may also have to travel across dangerous areas.   When habitat is bisected with roads or other development, it is harder for animals to, as it were, cross the road to the other side safely.  Many animals are killed.  Some will refuse to even attempt to cross areas of human development.   When animals become isolated, unique genetic material is rarely introduced to the population.  It loses genetic diversity. This loss of genetic diversity means the population will have a difficult time adapting to changing conditions.  The population becomes unstable and its numbers will decline.

Fragmentation and the Problem with Crossing Roads

The problem with crossing roads or other barriers such as agricultural land is that animals are less likely to cross this unfamiliar terrain.  And for those that do make the attempt, death by accident is often the outcome.  Therefore, most animals breed with others in their own patch and inbreeding is the result.  High levels of inbreeding result in a big reduction of novel genes in that population.  If a new disease or disaster occurs then the animal could become locally extinct because there are no individuals with the unique genes to survive.  And because so few animals attempt or make the crossing from one patch to another, recolonization of that patch from neighboring patches is unlikely.

Species diversity is disrupted by habitat fragmentation as well.  Small forest patches cannot support large predators.  The predator-prey relationships are broken and the populations of other creatures are no longer regulated by the hunting activities of these large predators.  The populations of some creatures will explode for a while until they run out of food and or succumb to an outbreak of disease.  Then their population crashes and again local extinction becomes a threat.

Climate change may force some populations to migrate to areas with more favorable climate.  A fragmented habitat may make this movement extremely hazardous or impossible leading very possibly to the local extinction of affected populations.

Natural processes may also cause fragmentation of habitat:

There a number of consequences of habitat fragmentation:

My journey in understanding the dangers of habitat fragmentation began all those years ago as an undergrad at Brock University.  Prior to completing my fourth year thesis I never really gave much thought to the roads and development bisecting our landscape.  I’d come across road kill and felt bad about the fate of those animals.  I never made the connection to the wider issues involved in habitat fragmentation.

Education is important.  It helps us make those broader connections.  It spurs us to want to make a difference by fixing or at least alleviating problems.  There are ways to help animals cross the roads to get safely to the other side.  But that is a topic for another post. 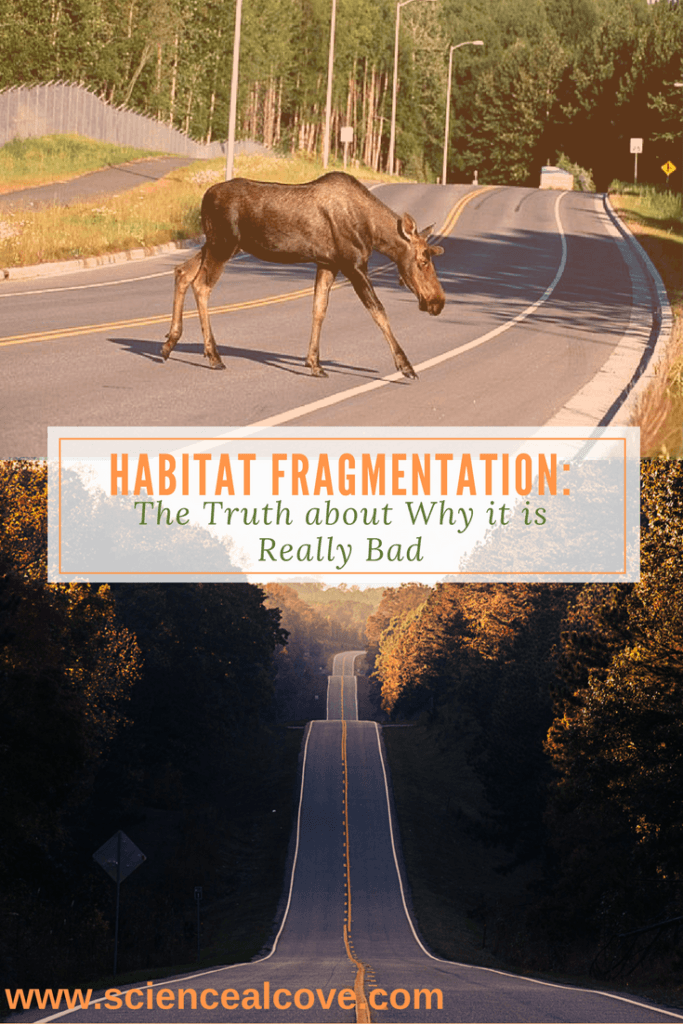