Actually, What is the Reason We Fear Friday the 13th?

Inside:  Friday the 13th strikes fear into many. Some won’t fly or get married that day. But what is the reason we fear Friday the 13th?  *Contains Amazon Affiliate links.

Evolution and Why We Fear Friday the 13th

Fear of Friday the 13th one of the most popular myths in science is called paraskavedekatriaphobia as well as friggatriskaidekaphobia. Triskaidekaphobia is fear of the number 13. — unknown

Most of us have them.  Little rituals we do before certain tasks or events.  If you’re an athlete you probably have a favorite totem that you must wear or have on you before every game.  These are modern-day superstitions.  Some of us may go so far as to avoid black cats, or staying on the 13th floor of a hotel.  Many of us refuse to travel or engage in other activities on Friday the 13th. But where does this fear of Friday the 13th and other often more bizarre superstitions stem from?

Superstitions have been part of being human almost since…well since humans evolved.  Our ancestors lived in small, tight-knit groups.  Their world was very small and they feared what they did not know or understand because it could kill them.
Fear of strangers, predators and the unknown was a survival mechanism.  It was part of our evolution.  The ability to avoid poisonous plants and dangerous predators was essential for survival.  When a method worked it was associated with surviving the incident.  Those who survived reproduced and their aversions passed on as well.
Some of the avoidance actions did actually result in escaping danger. However, some of them coincidentally were associated with survival but didn’t really save a life.  Like when an athlete wears red socks and wins the game and thus wears red socks to every game. You repeat the behavior because it worked once.  And you have an undeniable urge to wear those red socks to make sure you win every time or you listen to every rustle in the grass and interpret it as a predator.  It doesn’t cost much in time or energy and sometimes it works!

We associate rituals with coming out ahead.  We have them and so did our ancestors. These actions give a sense of control over difficult to control situations. This pairing of actions with results whether they actually in fact work or not is the evolutionary basis of superstitions.

Superstition is foolish, childish, primitive, and irrational-but how much does it cost you to knock on wood? —   Judith Viorst

All humans crave control in their lives – in the past as we do now. Situations that are complex, affected by a number of factors are more difficult to control.  Superstitious beliefs give us that sense of control over more uncontrollable circumstances. Avoiding predators involves a large number of factors.  Rituals related to these complex situations gave our ancestors that same sense of control felt by athletes who MUST wear those red socks to win. Rituals are superstitions dressed up in fancy clothes!

Human Fear of Friday the 13th

So, why do we have this big fear of Friday the 13th?  Again, it goes back to an earlier time and that evolutionary bias for ritual.  The number 12 was revered by mathematicians and astronomers. Pythagoras was a classical mathematics genius, teacher, and leader of a pagan religious movement.  He taught that the number 12 had divine and mystical meaning. The sky was divided into 12 parts.  There are 12 months in the year reflecting constellations moving in the heavens.   The Greeks and Romans had 12 gods ruling each part of the sky and even Norse mythology had Odin with his 12 sons.  The Babylonians had tremendous influence on our science and religion and they revered the number 12.  In the Bible and Christian symbolism, the number 12 plays a big role in being complete and in a state of perfection.
In every culture, where there is good there is also evil.  12 is a unique number.  It is small but divisible by 1,2,3,4 and 6 making it a useful number for counting, and relaying the passage of time. Thus, it seems intuitive that a number revered is followed by a number that is feared.  Following the number of perfection, the Babylonians considered 13 to be symbolic of imperfection and it was their number for the underworld.

Origin Stories of Friday the 13th

So, when did human preoccupation begin with Friday the 13th. Many origin myths abound.

It is unlucky to have thirteen at a table or in a company. The number 13, in the Christian faith, is the number of people at the Last Supper, with the 13th guest at the table being the traitor, Judas. — unknown

One story insists that Friday the 13th has been considered unlucky since 1307 when the King of France gave the orders to arrest hundreds of Knight’s Templar on Friday the 13th.  This particular origin story lacks credibility since it wasn’t until early in the 20th century when references to this unlucky day crop up.  These references seem to coincide with a novel published in 1907, Friday, the Thirteenth, by Thomas William Lawson.  Before this novel, Friday was considered unlucky and the number 13 was associated with bad luck.  It seems Mr. Lawson put the two together to create a mega-fearful day.

Do You Fear Friday the 13th?

If you fear this day you are in good company.

President Franklin D. Roosevelt would not travel on the 13th day of any month and would never host 13 guests at a meal. Napoleon and President Herbert Hoover were also triskaidekaphobic, with an abnormal fear of the number 13. — unknown

There are a number of superstitions related to the most feared of days, Friday the 13th.  Let us know which ones you relate to by taking the poll. 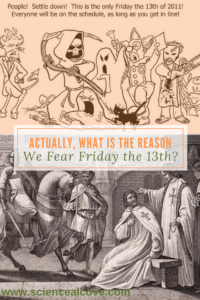