What Do You Need to Know about Amazing Bioluminescence?

Inside:  Bioluminescence is an amazing chemical reaction occuring in some living organisms, mainly deep sea creatures, that produces visible light.

What Makes a Firefly Light Up?

Bioluminescence — what a cool creature adaptation! Click To Tweet I love sitting out on a cool summer evening while watching flashes of light zip among the trees and fields of my property.

An estimated 90 percent of deep-sea marine creatures are able to produce bioluminescence in some way. Most emit blue or green hued light, though some creatures use a red-light strategy—taking advantage of the fact that red is the first color in the spectrum to be refracted. — JOHN RACANELLI

Fireflies are very cool in the insect world.  How is it that they light up the way they do?  Well, because it is science of course.  No batteries required!

Fireflies are relatively unique terrestrial creatures probably because there are not too many land creatures that can naturally light themselves up.  Most creatures producing light are found in the deep-sea.  What makes jellyfish glow?  Their light is because of bioluminescence too.  Sunlight does not penetrate the depths of the ocean.  Hence, light production is a huge advantage to these creatures.

Animal light is a form of chemiluminescence.  Marine invertebrates and marine vertebrates use it the most. Many fungi and bacteria light up their environments.  There are only a few terrestrial organisms, the firefly being the most famous, that light up the skies at night.

The Science behind Bioluminescence

Organisms that are bioluminescent make their own light. It is known as cold light because very little heat is made.  Bioluminescence requires a chemical reaction so just what makes a firefly and these other bright creatures light up?

Fireflies create light in the ends of their abdomen which is equipped with photophores.   These organs are the center of light production in the firefly.  The photophores contain two kinds of cells:  ones that create light and others that reflect light.

Animals produce their own distinctive light color.  Animals out at night tend to glow green while those out at dusk tend to glow more yellowish.  Marine organisms tend to glow blue-green.  These shorter wavelengths travel well and thus can be seen well in both shallow and deep water.

Inside the photophores, oxygen combines with calcium, ATP (the energy molecule of living things) and the chemical luciferin. Organisms like fireflies can make their own luciferin.  Then, when the enzyme luciferase is present light is produced.  Fireflies make very efficient light as nearly 100% of the energy they produce in the process is emitted as light.

Animals light up for a number of reasons.  The last five are relatively self-explanatory.

Five Other Ways Organisms Use Bioluminescence

Do All Creatures Make their Own Light?

Some creatures make their own luciferin and, therefore, make their own light.  Fireflies fall in this category of creatures as does the Vampire Squid and Bermuda Worm.  However, other creatures cannot produce their own luciferin.  The Angler fish houses glowing bacteria in its lantern to attract its next meal.  Known as symbiosis, there is a mutual benefit to both the organism receiving the advantage of having body parts glow and the bacteria which gets food and shelter from its host.  Conversely, the midshipman fish gets its glow from the “seed shrimp” it eats.  As they say, you are what you eat and it’s certainly true for this deep-sea creature.

What do you think of bioluminescence?

The photo to the left shows Shrimp Bioluminescence — The deep-sea pandalid shrimp Heterocarpus ensifer and a photo of the same animal ‘vomiting’ light from glands located near its mouth.  Which of the above eight reasons is this little fella using bioluminescence?  Let us know your thoughts in the comments below! 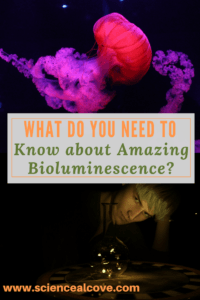