10 Thrilling Reasons to Seize the Chance to Study in Iceland

Inside:  Iceland is a stunning island. It is a fantastic place to study glaciers, volcanoes, puffins and fault lines. Seize the chance….study in Iceland.

What a thrill to Study in Iceland

My son just recently successfully completed his first year of Integrated Science at McMaster University.  It was a thrilling year, he tells me, but the work was gruelling.  Half way through the year, he called me to ask about taking an Integrated Science course in May.  “Its in Iceland mum”, he says.  “Anyway you can help me get there by covering some of the cost?”  After getting the details, we counted up the costs including airfare. My kid flying to Iceland was a rather expensive university credit but come on…..How often does a kid get a chance to study in Iceland?

Iceland, also known as the land of ice and fire is an island with active geology. Click To Tweet Located along a very active fault line, the North Atlantic Mid-Ocean Ridge (MOR), Iceland sits where the North American and European plates are separating.  My son spent most of his time visiting the west-central and southern parts of the Island.  His group spent a lot of time around the plate boundary at MOR where it comes up on land.

Jarod was able to take a jeep ride up to the top of a volcano and look into its crater.  He spent time viewing Eyjafjallajökull, a recently active volcano that interrupted my mum and dad’s flight to the Netherlands in 2010.  They viewed enormous lava flows, the largest in the World in the last 10000 years and Europe’s largest ice cap – Vatnajökull.  They viewed large glacial lakes, hot springs and geysers.  Jarod swam in a natural swimming pool, heated by lava flows beneath the surface.  He participated in a polar plunge where he swam with ice flows.

Check out 10 thrilling reasons to study in Iceland.

10 Reasons to Study in Iceland

Iceland, the land of ice and fire is an island of active geology. View active volcanoes, examine lava flows and experience the large glacial lakes, hot springs and geysers typical of a land sitting along separating tectonic plates. It is a land of glaciers but with geothermal energy in abundance, and the moderation of temperature from the surrounding ocean means you won’t be freezing your bunions off. Take a look at 10 fantastic reasons you should study in Iceland.

It is the land of the Midnight Sun.

Starting in May, when my son travelled to Iceland with other McMaster University science students, it stays very light well past midnight. Never fear about running out of daylight when visiting a site. During my son’s stay in May, his group was getting about 17 hours of daylight. Even at sunset, Jarod found it was still not pitch black.

You can visit islands from the Island of Iceland

Jarod left the main island of Iceland to visit a smaller chain of islands, the Vestmannaeyjar Islands by ferry. He was hoping to see puffins that day but alas they were not cooperating.

You can take your best alien friend, ET, and show him the sights.

ET saw many of the sights of Iceland, sharing in all of Jarod’s adventures. Its always nice to share your experiences with a friend!

You can examine Arctic Ocean Life up Close

Iceland is home to an abudance of marine life, including echinoderms like this cool starfish.

You can learn about Geothermal Energy from a country that utilizes it well.

The people of Iceland are pioneers in the use of geothermal energy for space heating. Even in May it was very cool outside but Jarod discovered most people sleep with their windows open as an abundance of heat is created through geothermal plants. The Mid Atlantic Ridge separating the North American plate and Eurasian plate is very close to the surface in Iceland meaning the magma is close to the surface and there is an unlimited source of heat.

You can learn about tectonic plates up close and personal.

Steam rises from volcanically heated water in Thingvellir valley. Magma is close to the surface along the MidAtlantic Ridge. What a way to learn about geology.

You can swim in a naturally heated pool.

Another benefit of that midAtlantic Ridge is the dozens of volcanically-heated pools. Fabulous to have natural hot-tubs close by.

You can take a jeep Ride to the top of a volcano.

A jeep ride to the top of volcano Eyjafjallajokull is the ultimate adventure in Iceland. Jarod said it was well worth the investment!

You can visit a number of fantastic waterfalls

A day trip to the beautiful waterfall of Seljalandsfossas is an unforgettable adventure. It is only one of many such natural wonders.

You can see Glaciers up close and even participate in a true polar plunge – if you dare.

About 11% of Iceland is covered by glaciers. Even in May, there are chunks of ice in the ocean. How many people can claim to have gone swimming in Iceland? My son Jarod can. I just wish someone had thought to take a photo while he was still in the water! 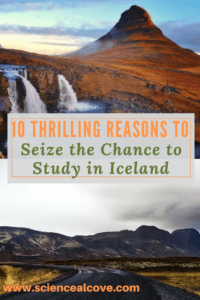