6 Startling Reasons You Need to Know about Firefly Decline

Inside:  Surprisingly, firefly decline has been noticed in North America. There are 6 important reasons why and some practical things we can all do to help.

Firefly Decline?  Who Would Have Guessed?

Firefly Decline.?  I discovered an article in my Facebook feed and was shocked.  First of all as a kid I enjoyed an evening light show when visiting relatives lucky enough to live in the country.  Now, I live on my own sprawling 100 acres and I enjoy a nightly show of bioluminescent fireflies every night from May until early August.

Children love fireflies.  Catching them and putting them in mason jars to make a firefly lantern is a summer right of passage.  I needed to write this post when I discovered firefly populations in North America seem to be dwindling in numbers.

Reasons Firefly Numbers May Be in Decline

The larva of fireflies live in rotting wood and forest litter.  The larva eat mainly snails and worms which are plentiful in this habitat.  Fireflies love warm, humid areas near standing water and their preferred habitat is in open fields and forests near ponds, rivers and streams.  Anything that disrupts those features jeopardizes firefly populations.

How We Can Make a Difference for the Fate of Fireflies

We can make our homes more firefly friendly.

Here's hoping that fireflies continue to charm us, our children and generations to come. Click To Tweet Check out the Firefly Watch website.  Watch your yard for fireflies, in the dark. Make some changes to your landscaping to attract more of these glowing bugs.  Hopefully you and your kids will be able to enjoy the language of light from hundreds of these beautiful insects. 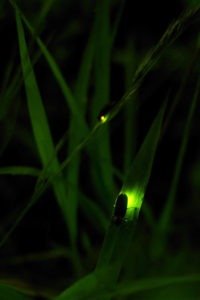 Other Species in Decline

Fireflies are not the only species in decline.  We first moved to our farm in the Oak Ridges Moraine 15 years ago and the barn swallows were a force of nature.  They returned without fail each spring and delighted me by dive-bombing my lawn mower, seeking out bugs frightened into the air. It is worthy to note barn swallows are at an all time low this year —  a sign of climate change? Or just as troubling, humanity damaging their habitats?   I don’t feel the tickle of their feathers because they no longer swoop so close to my head searching for an easy meal.  You can read more about Barn Swallow decline here. 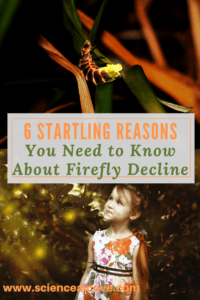