Check out this Bad Bug. Its Weird, It Flies and What is it?

Inside:  Giant flying bugs – these ones are weird, dangerous-looking and live where you least expect. Liking bright lights they’re also called Electric Light Bugs.  **This post contains Amazon Affiliate links.  If you click on them I may receive a small commission at no cost to you.

Giant flying bugs —- I was watching my kid at football practice the other night.  On the track, in the air and on the bleachers we saw these giant flying bugs.  They were huge and dangerous looking creatures.  I’m not usually afraid of picking up bugs to show my kids or students but these bad boys gave me pause.  My first thought was they were a katydid or cicada.  It never dawned on me what was their true identity.

After a little research, I discovered these weird bugs were aquatic bugs – giant water bugs in fact.  Known as Giant Water bugs, they are also called Electric Light bugs and Toe Biters.

These bugs, like many insects, are attracted to light.  In the evening at the football field, the lights are large and bright.  Especially during mating season which it so happens to be in late April, early May these bugs fly from pond to pond looking for mates.  And they get distracted by pretty bright lights hence the name Electric Light Bugs.

Step in a pond unaware of these creatures and you might feel their wrath as they defend themselves with their awesome pincers grabbing your toe.

What are these Giant Flying Bugs?

These bugs I discovered are from the insect order Hemiptera meaning true bugs”.  They are likely from the genus Lethocerus, a genus of quite large, predatory aquatic insects.  Most likely they belong to the species Lethocerus americanus and can grow up to 4 inches in length and have an insane appetite.  They feed on aquatic insects but also small fish, 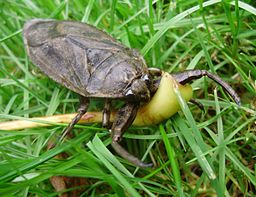 tadpoles and sometimes small birds. How do they handle such large prey?, you may ask.  Well, their method of subduing prey is not for the faint of heart. Read further only if you have a strong stomach!

These huge bugs can lie in wait for their prey to pass by close enough to grab or they can actively swim after their victim.  Their hind-legs are paddle-shaped and have long hairs.  These hairs fan out as each leg is stroked which increases their pushing power.  In other words they are fast.

Their mouth parts are fused into an organ called a rostrum.  It punctures prey and delivers a powerful set of digestive enzymes which means the organism dies while it’s insides are being digested into soup.  This digestion happens in about 10 to 15 minutes after which this bugs sucks out the insides of its prey using that same mouthpart.  All that’s left is the empty shell of the organism.  Yuch!

These bugs are aquatic organisms but breathe air like us.  Living in ponds or ditches or even sometimes abandoned swimming pools, they suspend themselves just below the surface of the water.  They breathe through 2 abdominal structures that act like siphons, penetrating the water’s surface just enough to get the oxygen they need from the air.

Because giant water bugs breathe air and are fabulous flyers, they do leave their aquatic home. Click To Tweet This is usually to search for mates. Judging from the large numbers we were seeing a few weeks ago, finding mates was likely their goal.

Their bite is considered to be the most painful of any insect.  They can pinch with their front legs or jab with the fused mouth parts.  Either method is excruciatingly painful but not medically dangerous.

The giant flying bugs go through simple or incomplete metamorphosis.   The female deposits an egg cluster above ground on vegetation or other objects while the male guards the cluster and 2 weeks later nymphs hatch. Nymphs look like miniature versions of the adults and mature into full-size adults through several molts of their exoskeleton or outer skin.  Total development from egg to nymph to adult takes about 1 to 2 months.

In Asia, people eat these bugs both fresh and cooked.  They are considered a yummy delicacy.  Keep them as an interesting aquarium pet!  But take note they need live food as they will only hunt moving creatures. Warning! Don’t keep them with your favorite fish! 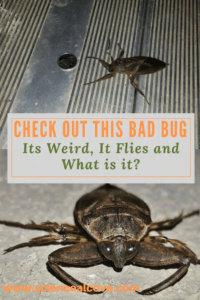