Inside:  Nanobots that kill cancer cells? It sounds like an idea right out of science fiction. But they are real and may be a therapy not that far away.

Nanobots that kill cancer cells? It sounds like an idea right out of science fiction.  But scientific advances often begin in the minds of creative writers and science fiction.  The cartoon, The Jetsons predicted flat screen TV’s, the roomba vacuum and tanning beds.  Characters in the novel, Fahrenheit 451, use something called Seashell radio whose description is remarkably similar to modern ear bud headphones. 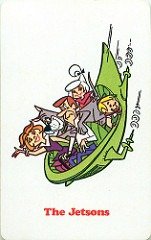 Jetson’s predict the future
Mark Anderson, CC BY 2.0, via Flickr

Typical use of the word nanobots describes machines or robots microscopic in scale. We are talking machines that are a billionth of a meter in size.  That is very, very, very tiny. Have scientists created microscopic robots to attack cancer cells?  That would, come to think of it, be a great idea for a science fiction story.

Cancer is a family of diseases resulting from abnormal cell growth.  The cells from these growths tend to spread and invade other areas of the body.  Exposure to radiation, some viruses and parasites, some chemicals and being overweight and/or inactive can cause cancer.  Because cancer is not just one disease and because the tumors tend to be surrounded by healthy cells, it is very difficult to treat cancer without harming surrounding healthy tissue.  Modern treatments for cancer including chemotherapy which involves potent drugs, radiation treatment and surgery also harm surrounding tissues.  Sometimes the treatment for cancer can seem as bad or worse than the cancer itself.

What if it was possible to deliver drugs only to those cells that were cancerous? Click To Tweet What if damage to surrounding tissue was minimized or eliminated completely?

Ido Bachelet, a postdoctoral fellow at Harvard Medical School in Boston, Massachusetts, has developed just such a mechanism.  He calls it a nanorobot because it can do repetitive tasks, much like a robot.  These devices are like miniature clam shells. Inside is the payload designed to kill a particular cancer cell. 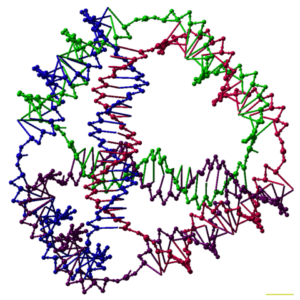 Once this device recognizes its target cell, it changes its shape, opens up and delivers its cargo designed to kill the cancer cell only.

Interestingly, these nanobots are like a work of art.  They are built using a type of origami (yes like paper-folding).  In this case, DNA is ‘folded’ into barrel-shaped devices.

These devices have sites inside that the payload attaches to.  On the outside, there are 2 sites.  Short nucleotide strands attach to these two areas.  They are responsible for recognizing key molecules on the cancer cells.

When both markers attach to the cancer cell, then the beautiful, origami DNA nanobot opens up and releases its deadly payload.  In this way only the cancer cell is killed.

Many Scientists One Goal—Nanobots that Kill Cancer

Other researchers are working on similar mechanisms to kill cancer while preserving surrounding healthy tissue. Nanobots seem to be a common theme in cancer research but the building blocks for these tiny soldiers differs among the research teams. Some researchers are experimenting with inorganic molecules. 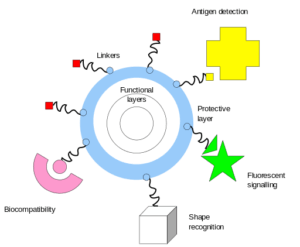 These nanobots would be closer to what most of us would imagine – miniscule machines racing around through our bloodstream.  These nanobots have the potential to be used in imaging or photothermal therapy.  But because they are made of foreign material they also have a high risk of being rejected by the human body.

Some organic nanoparticles have been approved or are now in clinical trials for treating human cancer.  That is exciting news.  These particles are being used, much like the nanobots developed by Ido Bachelet, as drug carriers only. They are still very useful therapy because they only target cancer cells.

Have scientists created very tiny metal men that attack cancer in a human? Well, in essence yes. Click To Tweet Some of the developments include inorganic nanobots.  Organic nanorobot and nanoparticle development seems to be progressing more quickly.  Because they are made of the stuff of cells, the human body is less likely to reject them.  Researchers can tailor them to specific cancer cells—possibly even to cells within an individual making rejection very unlikely indeed, allowing the bots to do their job.

Chemotherapy and radiation treatments cause so much pain and suffering on top of an incredibly debilitating disease.  Treatments that target only the cancer cells would be a much more efficient, humane option.  Cancer could be stopped in its tracks, killed, eliminated.  I am hopeful their widespread use is close upon us. 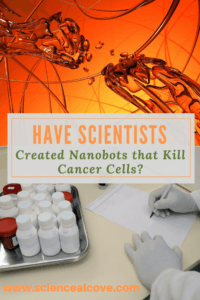