What Creatures Make Up the Shells of Lake Huron?

Shells of Lake Huron may not compare to more tropical shells in terms of size and variety of shapes and colors but they can be found in abundance along the shores of most beaches in Ontario, Canada and Michigan, U.S.A.   As a kid, I spent hours collecting shells along the shores of my favorite beaches in Sarnia.  The shells in the feature photograph of this post were found along the shore of Mike Weir Park Beach in Bright’s Grove, Ontario now part of the larger City of Sarnia.  From what I can tell from my research, these shells are likely remnants from one or both of the a couple of species.

Creatures that make up the Shells of Lake Huron 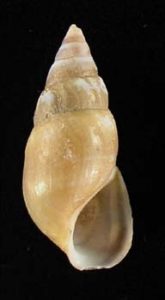 USGS [Public domain], via Wikimedia Commons
It is a fresh-water snail found on rock shoals and gravel bars which seems to fit with my experience of this part of Lake Huron.  It is an aquatic gastropod mollusk in the family Pleuroceridae.    The word gastropod comes from the Greek meaning stomach foot.  It can reach up to 20 mm in size and is thus not a giant among snail shells.  In my experience along Lake Huron, snail shells rarely get larger than this. Interestingly, its conservation status in Ontario is listed as vulnerable.

Any of various mollusks having a head with eyes and feelers, usually a coiled shell, and a muscular foot on the underside of its body with which it moves. Gastropods include both land-dwelling forms, like land snails and slugs, and aquatic species, like conchs, cowries, and whelks.
Word History Snails, conchs, whelks, and many other similar animals with shells are all called gastropods by scientists. The word gastropod comes from Greek and means “stomach foot,”a name that owes its existence to the unusual anatomy of snails. While they don’t have feet like ours, exactly, snails have a broad flat “foot” used for support and for forward movement. Thisfoot runs along the underside of the animal—essentially along its belly. The Greek elements gastro-, “stomach,” and -pod, “foot,” are found in many other scientific names, such as gastritis(an inflammation of the stomach) and sauropod (“lizard foot,” a type of dinosaur).
The American Heritage® Dictionary of Student Science, Second Edition. Copyright © 2014 by Houghton Mifflin Harcourt Publishing Company. Published by Houghton Mifflin Harcourt Publishing Company. All rights reserved.

This species is also a fresh-water snail known to be found in Lake Huron.  It tends to burrow in sand and mud.  There is certainly an abundance of sand along the shores of Lake Huron.  Its appearance is remarkably similar to E. livescens.

The shell of this snail can have up to 14 whorls and can reach sizes of up to 37 mm although in my over 35 years experience combing Sarnia beaches for shells I have never come across one of that size.  Its conservation status in Ontario appears to be imperiled which means its population is in decline and it is in danger of becoming locally extinct. Now that I know I can possibly find shells of that size on my favorite Sarnia beach I’ll be keeping a closer watch during my summer visits.

Share your photos or experiences beachcombing for shells along the shores of your favorite Lake Huron beaches.  Have you found similar shells?  Have you found anything wildly exotic?  Let us know in the comments below! 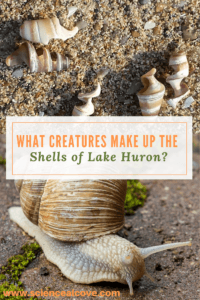