Will Cloning Endangered Species Save These Rare Creatures?

Cloning endangered species is the basic premise behind Jurassic World, the movie, which is all the rage at the box office.  It holds the record for third biggest opening day for a movie and for Universal Studios it brought in the biggest first day revenue.  While paleontologists have ripped apart the movie for deviating from known facts, most will admit that the movie is exciting and brings loads of attention to the field.  I remember watching the first installment, Jurassic Park, in the theatre in 1993.  Although the flaws were pretty obvious, I was fascinated with the idea of the cloning of an extinct species.  Lately in news feeds I’ve read articles proposing the cloning of woolly mammoths from DNA discovered in a mummified mammoth calf. And if cloning an animal extinct for thousands of years is possible, would it not make more sense to clone endangered or recently extinct animals?  Others are asking the same question.

A Scientific American article from 2013, Will Cloning Ever Save Endangered Animals?, outlines efforts of the Brazilian Agricultural Research Corp. (Embrapa) and the Brasilia Zoological Garden in collecting genetic material from dead animals mostly from the Cerrado Savanna.  Collections have been made from the bush dog, collared anteater, bison and gray brocket deer, among other species. 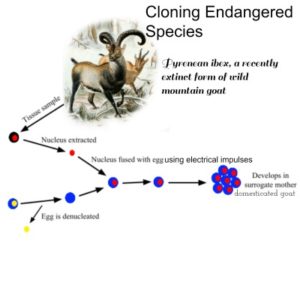 They are preserving this genetic material so that in the future, when technology is more refined, cloning endangered species can be used to bolstered their populations. Right now cloning is having mixed results. In many cases, the embryos die early on or if a successful organism is born, it dies early or lives for a while with developmental complications.  Most of these issues are the result of the organisms being a hybrid.  It has the nuclear DNA of the endangered or extinct organism but has the mitochondrial DNA of the donor egg.  If the egg donor and surrogate mother are very closely related, there are fewer complications and the resulting offspring have been shown to reach adulthood in such cases.  Cats and dogs used as surrogates for closely related endangered relatives have shown some success.  Others, where the egg donor and surrogate were more distantly related, as in the case of the Pyrenean ibex, have shown limited success – an offspring was produced but died hours later of developmental complications.

Many scientists see cloning endangered species as a practical option, even if only giving conservation methods some breathing room to preserve and expand the habitats required to support viable populations.  A large number of scientists have doubts about the viability of using cloning to increase the populations of endangered species.  In an article in Spiegel Online International, Robert DeSalle from the American Museum of Natural History in New York argues that the idea cloning as a viable solution is a sign of today’s “Western throwaway society,” and that “technology can’t solve the problem of large-scale extinction.”  In the same article, WWF wildlife expert Sybille Klenzendorf says, “Habitats cannot be cloned.”  Further, she asks,   “What use is a cloned animal if we have no more space where the species can live?”  I think the next twitter feed kind of sums it up:

Tell us what you think by participating in this week’s poll. 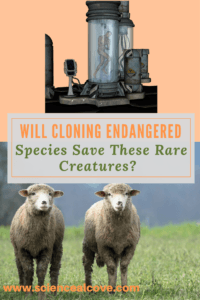