Ecosystem Importance According to Gerald Durrell

Gerald Durrell understood ecosystem importance.  Although he was a man of minimal education, Gerald Durrell was a friend to all animals.  Over a 70 year span, he saved many animals from extinction and improved the way zoos and animal refuges operated.  He gained thousands of followers all over the world sharing his passion and love for animals.  He was fascinated by all animal life and collected many small animals as a young man which translated when he got older to his life long passion of saving species.  It was an expensive proposition, however, and to finance his life’s work he wrote books as well as letters to friends and financial supporters and he made films.  John Orr in reviewing a biography of Durrell by Douglas Botting noted that, “As he got on with his life, and the Earth and its life forms became more and more endangered by the spread of human life and industry, the weight of trying to save life bore down more and more heavily on his shoulders.” He certainly understood the impact of humans on ecosystems and the role we play in the extinction of species and perhaps eventually in our own demise. 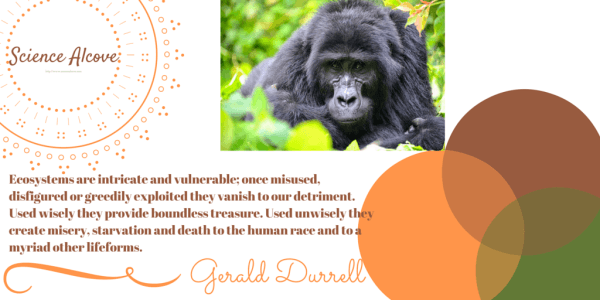