What Everyone Should Know About Endangered Species

Inside:  Species don’t usually go extinct overnight.  There is a process, usually a fairly long one where its numbers decline until it is no longer found in nature.  The ICUN has developed a system of classification showing the road to extinction.  Fortunately is not necessarily a one-way road.

What We Need to Know About Species Extinction

1.  The most recognized organization for determining the conservation status of a species is the IUCN (International Union for the Conservation of Nature) founded in 1948.  The world’s largest conservation organization, it it is serviced by over 11000 volunteer scientists and other experts as well as over 1200 government and non-government members.

3.  A species is declared extinct after many years of not being spotted.  It takes a very long time to declare a species extinct meaning we are probably unaware of a number of species already gone.

Park Rangers (guardaparques, in Spanish) patrolling in the Iguazú National Park in Argentina

4.  Rangers are frontline workers in the conservation of many endangered species.

6.  It is estimated that 30% to 50% of all species today are heading towards extinction by mid-century.

7.  Of the species now threatened, about 99% have reached this status due to human activity including human-caused habitat loss, introduced species and human-influenced global warming.

8.  The Endangered Species Act of 1973 (ESA) protects registered endangered species in the following way:  the species are removed from the “take” list meaning it is unlawful for any person to shoot, harm, capture, trap or attempt any of these actions.

10. Freshwater ecosystems are home to over 100,000 known species of both plants and animals.  This ecosystem is now one of these most endangered habitats in the world due to human settlement, pollution and climate change. 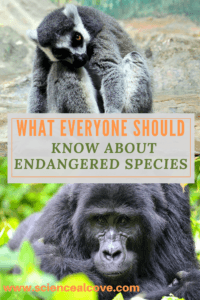