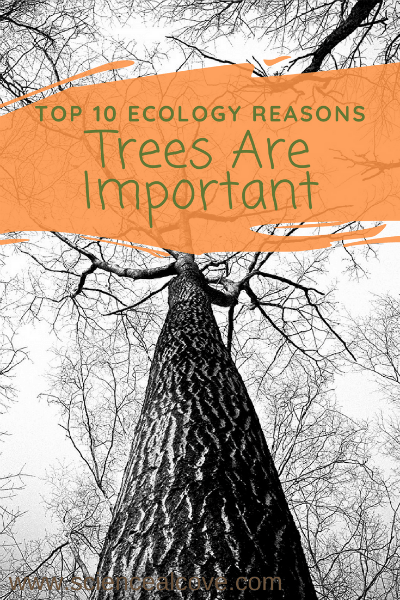 Inside: Trees are important, ecologically, for a number of reasons. From making oxygen to cleaning our air and soil, discover 10 reasons trees are so important.

Trees are important in improving the human condition. Click To Tweet During its life and after harvest, a tree has many key functions in any ecosystem.  For the air, soil, and other organisms. they are vitally important.  For humans, trees are important economically but more importantly they are necessary for keeping us alive and healthy.

“A nation that destroys its soils destroys itself. Forests are the lungs of our land, purifying the air and giving fresh strength to our people. ”
― Franklin D. Roosevelt

One mature leafy tree can produce enough oxygen in a season to satisfy the oxygen needs for 10 people.

A one acre forest produces about 4 tons of oxygen which is enough to meet the yearly needs of 18 people.

Trees combat climate change, slowing global warming, by locking away CO2 during the process of photosynthesis.  Photosynthesis is the chemical process where plants take the energy from sunlight and store it in a sugar molecule which is made from carbon dioxide and water.  An acre of pine trees (~120 trees) has the potential to store roughly 5 tons of CO2 per year.  Young trees tend to store more CO2 then they release during respiration, thus, they do reduce carbon dioxide available as a greenhouse gas.

Trees clean the air we breathe.  When they take in the gases for photosynthesis, other pollutant gases such as CO, SO2, NO2 are also absorbed by plants meaning humans and other organisms breathe easier.  Trees also intercept airborne particles.

Trees clean the soil through the process of phytoremediation. This process involves the action of plant roots absorbing dangerous chemicals and other pollutants that have entered the soil.  Sewage and farm chemicals are reduced or removed in this way.  The toxic effect of animal waste and roadside spills are greatly reduced and the water that runs off into streams is purified.  Many of these contaminants are degraded or transformed within the plant and      by-products that are released through the leaves during transpiration are either harmless or less toxic.

Popular soil erosion control measures involve tree and grass planting projects.  Along rivers and streams, the natural growth of trees and grass slows the runoff of water and buffers the soil underneath so less is carried into the water.  This is because tree (and grass) roots bind soil, holding it together so less is lost with the running water.  As well, tree leaves break the force of wind and rain on the soil slowing erosion.

Shade trees cut the need for air conditioning in the summer and in the winter evergreens especially, break up the force of the wind by lowering heating costs.  Trees cool a city by up to 10oC – 12oC through the shading of leaves and the releasing of water vapor through transpiration.  Wildlife will seek out the forested areas on hot days to get a break from the heat of the sun.

Trees along water courses slow flash flooding.  The slowing water is better able to soak into the ground and reach the waiting aquifers. One fully grown Colorado Blue Spruce can intercept more than 1000 gallons of water annually.

Forest corridors allow safer movement of animals from one area to another. Some animals such as deer and wild turkeys feed in open pasture or cropland and retreat to forests for shelter from predators.  Open fields linked by forested corridors provide travelways for wildlife.

Trees, especially mature forests, provide habitat and food for animals and birds.  The diversity of plants and animals is preserved and increased in forests which results in more stable ecosystems. 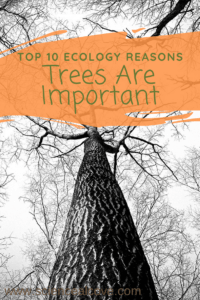