Does Anything Really Die? Coelacanth a Living Fossil

Insert:    The coelacanth is a living fossil. Thought to have gone extinct 65 million years ago, the first living specimen was caught in 1938.

The Coelacanth is considered a living fossil.  Up until 1938, it was thought it had gone extinct in the Late Cretaceous.  The discovery of this fish still living when it previously was considered extinct, makes the coelacanth the best known example of a Lazarus taxon – an evolutionary line which seemingly disappeared from fossil records only to reappear much later.  In the case of the coelacanth, it was discovered by deep sea trawlers off the coast of South Africa in 1938.

Coelacanths are members of the oldest known lineage of lobe-finned fish known as Sarcopterygii.  These fish are actually more closely related to lungfish, reptiles and mammals than they are to common ray-finned fishes. There are only two species of coelacanth that are known to exist and both are threatened.  Thus, they are the most endangered order of animals in the world.  The West Indian species (Latimeria chalumnae) is a critically endangered species. 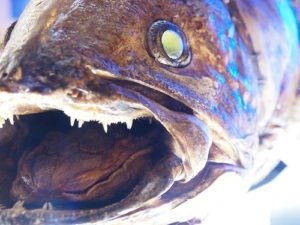 Its endangered status has nothing to do about commercial value.  Although the fish is coveted by museums and private collections, it is worthless as a food fish.  Its tissues exude oils that give its flesh a foul flavor.  The survival of this species is threatened mainly by commercial deep-sea trawling where the coelacanth is caught as by-catch.

Today, Coelacanths can reach up to 2m in length and weigh as much as 68kg. They tend to be dark blue in color although the Indonesian variety tends to be brown.  They have distinctive white flecks which are unique to individuals much like the stripes on zebras.

They have a single, large elongated pseudo-lung filled with fat, a heart chambers arranged in a straight tube and an axial skeleton (in humans would be the head, spine, ribs and breastbone) which is composed only of an oil-filled notochord.   They have intestines like a shark with a spiral valve to increase nutrient absorption.  The back of the skull has a hinge which allows them to open their mouth very wide to consume larger prey.  Another unique feature is their cosmoid scales that act as protective, thick armour.  They are opportunistic feeders, hunting what is available including cuttlefishes, squids, snipe eels, small sharks, and other fishes found in their habitat which includes deep reefs and volcanic slopes. Locating prey is helped by their rostral organ found in the snout which acts as an electric field receptor.

Coelacanths can live up to 60 years and are thought to be cousins of the Eusthenopteron which is the fish which developed legs and adapted to the land.  It is the ancestor of all tetrapods including ourselves.  The coelacanth retains many features of the ancient coelacanth although they have done some evolving including the ability to bear live young. 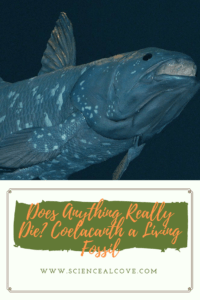