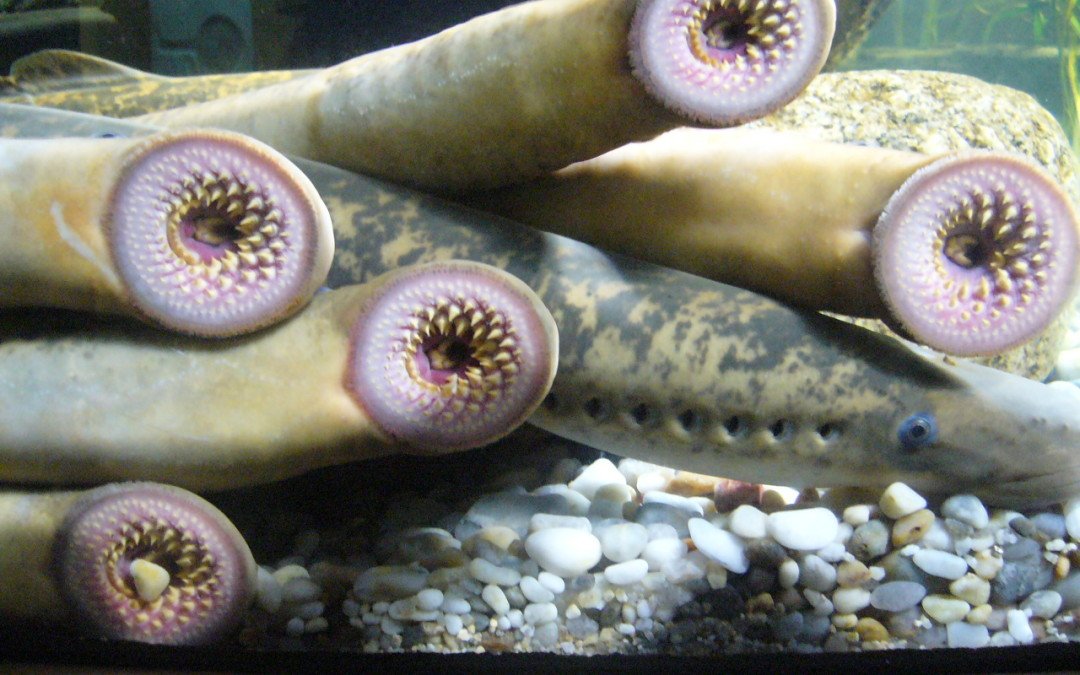 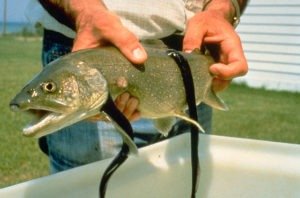 The Sea Lamprey, Petromyzon marinus, are blood-sucking, parasitic fish that have swum the Atlantic Ocean for over 340 million years surviving at least 4 major extinction events in that time.  These living fossils are jawless fish with a skeletal system made of cartilage.  Having evolved in their Atlantic Ocean ecosystem, the fish they evolved with do not succumb to the attacks of these creatures but are fed on much like we can be fed on by leaches (yuch!) and survive to tell the tale. 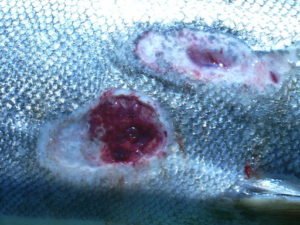 However, in Great Lakes areas, where these lampreys are introduced species, the fish they prey on most often die from their attack either from blood loss or infection.  In these waters, the Sea Lamprey have adapted to living their entire life cycle in fresh water.  Each Sea Lamprey can kill up to 40lbs of fish in the Great Lakes over a 12-18 month feeding period.  In Lake Superior, the Sea Lamprey played a very large role in the destruction of the Lake Trout population-an apex predator in that ecosystem before the invasion of the parasitic Sea Lamprey.

The Sea Lamprey is brown, gray or black on its back side.  It is white or gray on its underside and can grow up to 90 cm (35.5in) long.  It its normal habitat, it spends several years in freshwater as a larva then undergoes a metamorphosis that allows it to move to the sea and begin its parasitic lifestyle feeding on the blood of fish.  Some Sea Lamprey are able to start this feeding in freshwater before migrating to the sea. 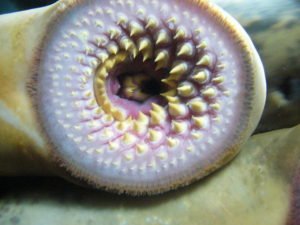 The Sea Lamprey has a terrifying, suction-cup like mouth.  With this mouth, the lamprey attaches to the skin of fish.  With its probing tongue and keratinized teeth rasp away tissue.  Then, this parasite secretes an enzyme preventing its victim’s blood from clotting.

In its natural environment, its prey have co-evolved with the lamprey and although they suffer blood-sucking from these predators, these fish usually survive.

Although these blood-suckers tend to prey on unsuspecting fish, I can only imagine the terror of coming face-to face with these vampire-like creatures.  And to have one attach to me while swimming the Great Lakes, like a huge, slimy leach, would be horrifying indeed.