Why is the Awesome Wolftrap Anglerfish so Terrifying?

Inside:  Wolftrap Anglerfish are deep-sea creatures from your worst nightmare with razor-sharp teeth, and a bioluminscent lure attracting prey to sure doom.

Anglerfish are a terrifying group of fish unto themselves.  Take a look at the photo below to get a good picture: sharp teeth and bioluminescence to attract unsuspecting fishies. Finding Nemo, that great Pixar kids movie used one of these creatures to terrifying and shocking use.  Read an excerpt from the movie.  Most fishes are not as lucky and Dora and Marlin.

Marlin: Tell me, Dory, do you see anything?

Dory: Yeah, I see a light.
Marlin: A light?
Dory: Yeah. I see a light.
Marlin: Yeah, I see it too.
Dory: Hey, Conscience, am I dead?
Marlin: No, no. I see it, too.
[they swim up to the light]
Dory: It’s so… *pretty*.
Marlin: [mesmerized] I’m feeling… happy, and that’s a big deal… for me.
Dory: I want to touch it…
[she does; the light bobs quickly away]
Dory: Oh!
Marlin: Hey, come back. Come on back here. I’m gonna get you.
Dory: Come here.
Marlin: [singing] I’m gonna swim with you…
Dory: I’m gonna get you. I’m gonna get you.
Marlin: [singing] I’m gonna be your best friend…
[a big scary fish looms into view]
Marlin: …Good feeling’s gone.
Marlin, Dory: AHH! — from Pixar’s Finding Nemo

Why Wolftrap Anglerfish are Terrifying

Wolftrap Anglerfish of the species Lasiognathus amphirhamphus are deep-sea anglers living at over 13,000 feet in-depth.  They get their name from their unique jaws.  Their lower jaw is tiny relative only to their enormous upper jaw which is wider with flaps that close over the lower jaw.  Both jaws are lined with sharp teeth, the upper jaw having longer curved or hooked fangs.  Like other anglerfish, they have a lure, looking much like a fishing line, that hangs over that oppressive jaw.  Now, as these creatures live at such deep depths light is almost non-existent.  That fishing line has a bioluminescent lure at the end which itself has hooks. This lure they use as bait to attract the small, bony fishes and occasionally small invertebrates such as copepods and mysid shrimp that they eat. 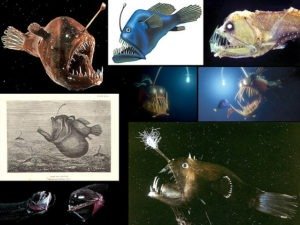 Anglerfish Come From Your Worst Nightmare

L. amphirhamphus is found off the Madeira Islands in the eastern north Atlantic Ocean.  Although males have as yet remained undiscovered, it is presumed that like other anglerfish species, the males are much smaller and sexually parasitic to the female.

The Wolftrap Anglerfish, comes right from your worst nightmare as do so many of these deep, dark-dwelling anglerfish.  As Dory and Marlin learned almost too late, in the deep darkness of the ocean it pays to stay away from the light! 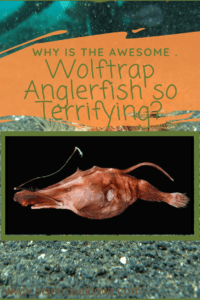