Radium Girls and the Death of Mae Keane

An interesting post appeared in my Facebook feed yesterday.  Mae Keane, apparently the last of the Radium girls, died this past March 1 at the age of 107.   What makes her death remarkable news is, in part, the industry she worked in for a short time in 1924.  She was one of perhaps hundreds of women who worked in the Waterbury Clock in Middlebury Connecticut painting the glow-in the dark dials on wristwatches. 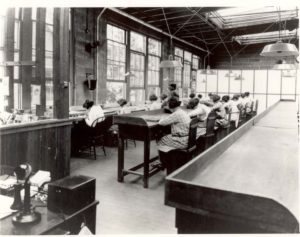 Why is this extraordinary you might ask?  Glow-in-the-dark objects are common today.  Big deal.  However, you’d have to know that back in the 1920’s until the late 1950’s, glowing technology most often involved an element known to be radioactive. The radioactive element radium has an atomic number of 88, and it is identified with the symbol Ra on the periodic table of elements.  It emits a glow as it decays and was used in paint to create a number of glowing objects including watch dials.

Mae only worked at the factory in Connecticut for a few days.  She was asked to quit due to poor work performance possibly as a result of not wanting to lick the paint brush after the painting of each dial number.

She hated the gritty taste of the paint.  The girls were encouraged to sharpen the brush by putting it between their lips, a process known as “lip pointing”.  In doing so, tremendous amounts of radium were ingested by each girl.  Many of these girls began experiencing health problems in those early years.

“There was one woman who the dentist went to pull a tooth and he pulled her entire jaw out when he did it. Their legs broke underneath them. Their spines collapsed.” — Deborah Blum, author of The Poisoner’s Handbook

The radium was eating their bones from the inside.  Many of these girls suffered painful and early death and Mae would have liked to thank the foreman that asked her to quit after only a few days of exposure.  She thankfully lived a long life but also suffered some health problems including bad teeth, migraines and two cancer diagnoses.  Knowing the potency of radium, it was likely a contributing factor.

Interestingly, radium was seen as a cure-all in the early part of this century.  It was said to restore vitality, increase sexual potency, cure arthritis, and a host of other ailments.  Radium was put in chocolate, water and other devices.  How many lives were ended or made miserable by these misguided treatments?  I’m sure the numbers would be staggering.  Which brings us back to Mae Keane.  She survived past 100 years which is extraordinary on its own.  Her exposure to radium was small in comparison to the others she worked with but it is an amazing story none the less!

Ignorance about the hazards of using radium in the workplace did not stop the lawsuits from the families of hundreds of women affected by radiation illness.  Many in the business did know early on that resulting illnesses in their workers was linked to the radium.  They ignored the dangers for profit and only later when some sick girls banded together and sued were they held somewhat accountable.  But how can you compensate those already dealt a death sentence?  And radium was not the only hazardous element to be used in common merchandise.  Uranium was used in glaze for dinnerware.  Lead was used more recently in paint and glass and was used in drinking glasses and dinnerware of the Romans and other early civilizations.  It makes one wonder how many other new chemicals deemed to be safe have hidden hazards, unknown or perhaps known to those who propagate their use?  Only time will tell I suppose.