Are You the Right Stuff for McMaster University iSci Program?

Inside:  If you have serious skills in organization, love research and can handle a crazy busy academic schedule the McMaster University iSci Program is for you.  Updated April, 2020.

Both my husband and I work in science-related fields.  He works in the nuclear energy industry and I am a science teacher.  All three of my boys love science and all three have excelled or are excelling at the high school level.  My oldest son is now studying Environmental Science at Guelph University.  I received a science degree from Brock University in Environmental Science.  The apple doesn’t fall far from the tree sometimes. He has decided to major in ecology which was my passion.

My middle son is now in the process of deciding where he wants to go and the program best suited for him.  It took a great deal of searching university calendars and attending guest presentations from universities at his high school but he finally found something that piqued his interest – the McMaster University iSci Program.

My middle son is a gifted person – psychological testing in grade 5 placed him in the 99th percentile in terms of cognitive ability.  Our school board only identifies those students who place in the 98th percentile or above as gifted.  Now, it didn’t amount too much in terms of extra attention at school.  There were some perks for a while when budgeting allowed for a teacher of the gifted but budget cuts are happening everywhere and something’s gotta go.  He was able to attend Kingston, Ontario’s Queen’s University Enrichment Program in grades 7 and 8 which allowed him to take part in higher level courses at the University for a three-day span.  He also participated in enrichment programs at our local Trent University in those same years.

Jarod is an amazing student, achieving high marks in the maths and sciences but also in English and Construction technology (woodworking).  Even though academics come quite naturally to him he works exceedingly hard putting in 2 or 3 hours or more in school work each evening as well as playing football and attending the weight room regularly.

Now what program, you must be asking, piqued the interest of this high achiever?  He will easily be accepted for every program he applies for – almost every program – as his grade 11 and 12 averages are in the mid 90’s.

The program he has set his heart on is the McMaster University isci program in Hamilton, Ontario.  It is an integrated science program which means his courses will come from all three strands of science – biology, physics and chemistry as well as math and psychology.  It is a program that emphasizes scientific literacy and research-oriented learning.  He will learn research skills and protocol from the ground up and be asked to work in a group setting.  The program is designed to turn out scientists who are able to look at a problem from multiple viewpoints.  For example, getting a manned mission to Mars involves more than developing the technology to fly there.  How will the group going to Mars have their life support maintained?  How will they be fed?  What types of psychological issues related to possibly never returning home, living in confined quarters etc will the crew and passengers face?  How will those issues be dealt with?  These and many other questions are inherent in a problem such as space travel.

The important thing is not to stop questioning. Curiosity has its own reason for existing. One cannot help but be in awe when he contemplates the mysteries of eternity, of life, of the marvelous structure of reality. It is enough if one tries merely to comprehend a little of this mystery every day. Never lose a holy curiosity. — Albert Einstein

This revolutionary program, only 5 years old, is designed to produce people up to this monumental task – students who can think outside of the box, work well in groups and are well versed in a number of scientific disciplines.

How to Apply to McMaster University iSci Program

How do you gain entry to such a program?  You might think it would be based solely on marks.  If that were the case then Jarod would be a shoe-in.  His marks, especially in science and math are exceptional.

However, that is not the case for this program.  They do need students who have shown consistently good grades in high school.  An 85% average in grade 12, including at least 2 sciences, both Calculus and Functions and Relations, and English, gets you consideration for the program.  After that feat, which is not an easy one, you must fill out a questionnaire of 5 questions designed to, I imagine, weed out students who are not highly motivated and those with high marks who are perhaps not suited to a group work situation.

Jarod submitted this on-line application today.  It was due tomorrow.  He has worked on this application for weeks and wanted to make sure it was just right – grammar, tone and enthusiasm.  They get about 400+ applications for this program.  They only accept 60.

“The hunger and thirst for knowledge, the keen delight in the chase, the good humored willingness to admit that the scent was false, the eager desire to get on with the work, the cheerful resolution to go back and begin again, the broad good sense, the unaffected modesty, the imperturbable temper, the gratitude for any little help that was given – all these will remain in my memory though I cannot paint them for others.” Frederic William Maitland

The odds are not great, I suppose, if you are a betting person. I’m rooting for my kid as any parent would. Although an extremely high-achiever , he does work well in groups – football and other sports activities have helped in that regard.  He has often had to work in groups completing lab reports and class presentations.  His experience in Honduras working for “Friends of Honduran Children” organization with his school shows a great social conscience also important in this program I believe.  All in all, he has a great shot I think but only time will tell.  He will find out in May whether he is a successful applicant.  He does have a plan B and C however.  So no matter what he will be attending university in the fall.  He is praying it will be at the McMaster University isci program!

Jarod was accepted into this relatively new discipline at McMaster University.  He has completed the program as of April 2019.  He began applying for jobs in May of that year.  By early June he began work as a programmer at a fairly new company called GHGSat , a company that uses satellites to collect carbon emission data which are then used to create a “heat map” of greenhouse gas concentrations from specific facilities.  This information is ultimately used in the combat against green house gas emissions.  Exciting stuff.  It is a fantastic first job that allows him to support himself in a large metropolitan area.

Later in 2020, he will be starting his Master’s degree in Aerospace technology.  The kid has plans and his iSci degree gave him awesome skills to pursue his dreams.

How did he evaluate the program?  He experienced some snags as all new university students do.  He had professors who deeply inspired him and others, well, not so much.  But that is par for the course in any educational program.

The work involved in the McMaster University iSci program was intense, to use his words.  There were a number of projects requiring endless hours of preparation and all involving presentations.  He was wickedly busy for most of the year.  But that did not stop him from participating in extracurriculars stuff.  He joined the Rocketry Club.  They designed an experiment.  His team, The McMaster Experimental Reduced Gravity (MERGE) Team studied how fuel behaves when transferred from one satellite to another in orbit.  They won first place at the Canadian Reduced gravity Experiment (CAN-RGX) Design Challenge in Ottawa in July of 2019.  His team took their experiment on board the Falcon-20 research aircraft which simulates micro-gravity conditions. 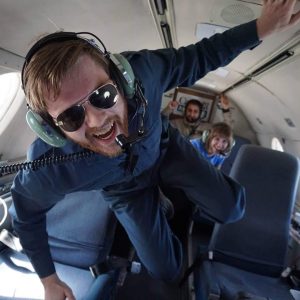 Jarod aboard the Falcon-20, experiencing micro-gravity conditions. What a thrill!

Does he regret his choice to enter the program?  No way!  He left this program having learned research protocol, presentation skills and successful organization in extreme workload conditions.  For two summers, through networking, he was able to secure a job working with an engineering physics professor at McMaster University researching lasers and photovoltaics. As he decided to concentrate in physics and wishes to concentrate in Aerospace technology, it was the perfect summer employment opportunity.

If you have serious skills in organization, love research and presenting your work and can handle a crazy busy academic schedule then this course will pay off in spades for you. Jarod has never been happier. 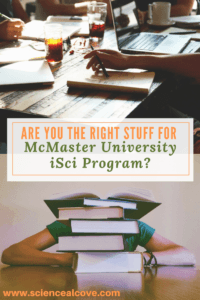