I read a number of posts yesterday for the blogging101 challenge.  We were to extend our reach and be neighborly by commenting on at least four new blogs.  Two posts struck me as they had a similar theme.  Low pressure and sinus troubles have been making my brain hurt lately so both posts with the brain as their theme struck a nerve or my brain so to speak.  At Commonplace Fascinating Facts, the post, Does This Hat Make My Brain Look Fat? struck me as amusing.  The title, however, belied the nature of the post which contained a fact presented by Canadian researchers.  As I am a proud Canadian, I was also tickled by the fact that Canadian researchers at McMaster University (a University my very high achieving son is considering attending next September!) determined that Einstein’s brain was 15% wider than normal.  This discovery must have been a difficult feat since Einstein’s poor brain had been preserved, sectioned and cut up with parts left in a box only to be rediscovered years later.  Pictures, however, were taken and those were used I believe as part of their methodology.  But… what is the significance of that discovery?  Is bigger really better – or in this case wider?  If Einstein’s achievements are indicative, then perhaps so! 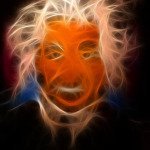 Scientists at McMaster University in Hamilton, Ontario determined that Einstein’s brain had a great deal of development in one area in particular – the parietal lobe.

They reason this accounts for the 15% extra width in his brain.  This area of the brain is responsible for mathematical reasoning and the ability to think in terms of space and movement.  His brain was also missing a groove that runs through this lobe which these scientists think allowed for greater neural connectivity.  In other words, the cells in this area of his brain played well with each other.  So… it does seem that bigger in some parts of your brain is really better… if being super smart is your thing.

I mentioned I’d commented on two brainy posts!  The other one I found in Bones, Ohms and Ribosomes.  The post was titled, Today in Science History:12th November.  Apparently, on November 12, 1935, Egas Moniz of Portugal performed the first modern surgery of the brain’s frontal lobes.  Many scary movies I’ve seen involve lobotomies.  Jack Nicholson’s Oscar-winning performance in One Flew Over the Cuckoo Nest was unforgettable.  Shutter Island and Session 9 are also disturbing for showing the horrific side of this procedure.  Moniz’s procedure required more invasive surgery but he only recommended it as a last resort.  Dr. Walter Freeman, however, was another kettle of fish.  He later “simplified” the process.  His “surgery” used a kitchen ice pick that was hammered through the thin layer of skull in the corner of each eye socket.  The pick was then scrambled from side to side to damage the frontal lobe.  Sounds compassionate doesn’t it!  Even though there was a 14% fatality rate, Dr. Freeman performed thousands of these procedures over his lifetime often without the use of proper sterilization and sometimes in public performing like a carnival act.

Brain Posts are Food for Thought

Both posts provided great food for thought and in the latter post some gruesome memories of entertaining but scary movies.  After reading further about lobotomies, I discovered a few interesting tidbits.  Rosemary Kennedy, sister of John F. Kennedy, had an ice pick lobotomy care of Dr. Freeman.  She was 23 years old and had mild learning difficulties and was apparently prone to mood swings and fits of anger.  Her father requested the lobotomy from Dr. Freeman which unfortunately left her incapacited and institutionalized for the rest of her life.  Rose, sister of Tennessee Williams, also received a lobotomy from Dr. Freeman for similar reasons and suffered the same fate.  Howard Dully, only 12 at the time, and the youngest to receive this procedure, received the ice pick lobotomy in 1960 because his stepmom didn’t like his defiant behavior at home.  Most teenagers go through defiance similar to what was attributed to poor Howard.  Crazy to think something like that could happen to a kid but it did.

“She gives your son a lobotomy, and that’s okay. Then she’s mean to your dog and you get a divorce?” —Howard Dully, My Lobotomy

He didn’t suffer the drooling, blank-eyed stare suffered by the above two ladies but he never felt the same and always thought he was missing something!  Scary stuff indeed.  A very few were helped and thankfully the procedure has fallen by the wayside as more effective and humane treatments became available.

Reading posts on other blogs has certainly got my juices flowing.  I’ve learned so much by branching off and doing my own research on some interesting things I’ve read.  Check out the links above of their work.  You never know what you’ll find.