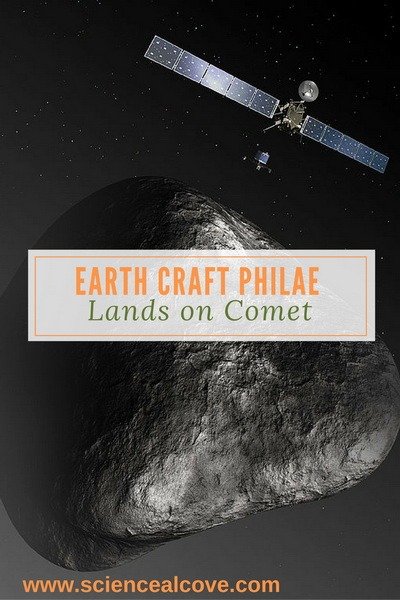 Inside:  November, 2014, the space probe Philae became the first Earth craft to land on a comet. Philae was designed to collect information about our solar system. This post contains affiliate links.  If you click, I may make some coffee money at no cost to you.

I watched the movie Armageddon quite a few years ago now.  Ben Affleck was in his prime and Bruce Willis was at his surly best as a deep-core driller.  Willis and his crew including Affleck are recruited by NASA to land on an asteroid on course to crash-land on earth obliterating humanity.  Sound familiar….at all?

In order to manage this feat, they must land a craft on the asteroid. Sound familiar yet???  This movie was released 16 years ago and it was only a few days ago that reality mirrored Hollywood and science was able to land a craft on a comet (similar to an asteroid 😀 ) Earlier this week, the robot probe Philae, became the first spacecraft to land on a comet – Comet 67P/Churyumov-Gerasimenko. Philae landed on the comet seven hours after it separated from its mothercraft Rosetta.

Some nifty facts about this space mission:

Why would anyone land a craft on a comet?

Rosetta and Philae are trying to accumulate information about some of the bigger cosmic questions.

All space missions have a primary mandate.  Captain Kirk’s was to explore all strange new worlds and to seek out new life.  Philae’s is no less daunting considering our technology to date.

Philae will give a full panoramic 3-D view of its landing site, a detailed analysis of the comet’s surface, including mechanical and electrical characteristics and using a drill will collect core samples where they will be analysed on board the space craft.

With this marvelous accomplishment can we now rest assured that if a comet decides to make a bee-line for planet earth we will be able to send a handsome group of blue-collar drillers to save our collective butts.  I feel hopeful.  What about you? 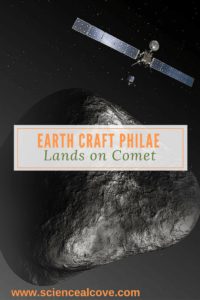