What do you Need to Know about Barn Swallow Decline?

Inside: Barn swallow decline has been an issue for many years. Smaller insect populations due to climate change and pesticide use may be to blame.

Barn Swallows over the Past Ten Years

My family and I have lived on two farms over the past 10 years in south-central Ontario.  When we moved to our first ten-acre bungalow, barn swallows were a very common site.  Our small barn had a number of nests as did the hay loft.  I remember vividly mowing the lawn in the spring and summer and often feeling the wind part my hair as swallows dive-bombed the area I was mowing for the insects being disturbed.  It was a surreal and yet exciting feeling watching them as they circled and then dived for the myriad of insects disturbed by my mowing.  Every week I looked forward to the mowing, knowing that my friends would be there to entertain me as I laboured!

In 2001, we moved to a 97 acre farm a few miles north of where we were.  This farm had three outbuildings including an old dairy barn which we converted into a run-in for our horses and two smaller barns.  Every one of those outbuildings would house dozens of barn swallow nests each year.  My father also built us some Purple Martin houses.  Although they did not attract Purple Martins, they did offer nesting sites for a number of bird species including the barn swallows.  Again, every spring I would wait for their arrival.  By the time I needed to cut the grass, there they would be by the dozens chasing the insects I disturbed.

“they dip and dance like barn swallows at dusk glancing wingtip-to-wingtip against a lavender sky barely touching – yet, each creating thermals for the other to catch and ride – higher and yet, higher – towards a pale star…” ― Kate Mullane Robertson

Dive-bombing barn swallows were a common sight for our first eight years in Millbrook, Ontario.  After that, I started to notice a difference.  Although I noticed their return each spring, they no longer followed my lawn mower for the insects it disturbed.  The barn, where my horses escaped the noon sun and biting insects, still supported a fair amount nests as did the barn behind our house.  The last two years, however, have seen a more disturbing trend.  Not only do I miss my dive-bombing friends, but spring is no longer heralded by dozens of returning barn swallows.  This year in the barn behind our house there was only one nest.  The horse barn had only two or three nests.

According to Jon McCracken of Bird Watch Canada, “In the last two decades alone, populations have fallen by over 70% in the case of Bank Swallow, Common Nighthawk, Chimney Swift, and Barn Swallow, and by over 50% for Cliff Swallow, Olive-sided Flycatcher, Eastern Wood-Pewee, Northern Rough-wingedSwallow, Eastern Kingbird, and Purple Martin.”

My son was lucky enough to come upon one of our dogs about to snack on a new fledgling.  It was saved by both of us and put to perch on the higher branches of a nearby shrub.  I am sure my dogs are responsible for a few barn swallow deaths but the lack of returning swallows each year is not their fault. Barn swallow populations have been on the decline for the past ten to twenty years.

Possible Reasons for the Decline of Barn Swallows

Have you noticed a decline in insect-eating birds where you live? Have you experienced the thrill of barn swallows dive-bombing you while mowing the lawn? Leave your thoughts and comments about the plight of bird populations in the comments below!

Update:  It is now August of 2016.  This year I could find no breeding barn swallows on our property.  Last year we still had a few nests.  It is a sad testament to the plight of insectivorous birds in general I believe.

Update:  It is now Early September 2017.  I have one nest that I can find that has a second generation of chicks.  Although the sky is not teeming with swallows I felt the thrill earlier this summer being dive bombed by several birds while cutting the lawn.  There were several birds it appeared working together to raise these chicks.  Hopeful recovery. 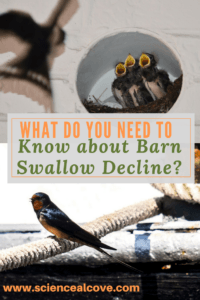