How to Make a Non-toxic Mosquito Trap

Mosquitoes can certainly turn a pleasant evening on the porch into a slap and itch fest.  Yesterday I posted why some of us are more prone to getting bitten by the little buggers than others.  Those of us who excrete certain chemicals on our skin, bigger individuals and exercise and movement ensure that some of us have targets on our bodies.  This post will look at a simple, non-toxic way to reduce the number of mosquitoes having access to your exposed skin.  If you drink pop found in the two litre plastic containers, you probably have all the materials you need in your kitchen.

Materials Needed for the Mosquito Trap

Putting Together the Mosquito Trap

Science Behind the Non-toxic Mosquito Trap

You learned in yesterday’s post that mosquitoes are attracted to carbon dioxide gas.  The yeast in the water mixture consume the brown sugar as a food source.  The breaking down of sugars by the yeast is known as fermentation which produces alcohol and carbon dioxide.  It is the same process involved in the production of wine.  In the case of wine, we are interested in the alcohol by-product.  In the case of the mosquito trap we are interested in the carbon dioxide by-product.  The carbon dioxide released from the trap by the action of the yeast attracts mosquitoes.  They are attracted into the funnel and most are unable to get back out and they die.  Thousands of mosquitoes can be captured every evening creating a more pleasant experience on your deck at dusk.

Please let us know if you have tried this type of trap.  Has it worked for you?  Have you tried your own version of a non-toxic mosquito trap?  I would love to hear about it in the comments below! 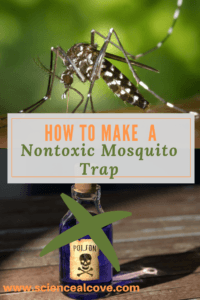